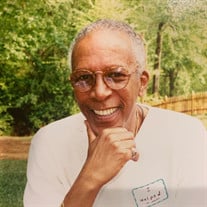 Adolphus Brooklyn Prince was born on February 5, 1934, in Washington, D.C., to Lillian and Brooklyn Prince. Upon his arrival, Dolph’s older sister, Viola, affectionately nicknamed him “Bay,” short for “baby brother.” As a child, Dolph relocated with his mother and sister, first to New Jersey, and then to Harlem, New York. In middle school, Dolph’s natural singing talent was evident, and following a highly selective audition process, he was accepted to and proudly attended the High School of Music & Art on West 135th Street. In high school, Dolph met his wife of 68 years, Patricia, at a dance at the Audubon Ballroom. Pat recalled looking across the room at the handsome young man and being struck with love at first sight. Dolph and Pat married in 1951, and the following year, their first child, Anthony Adolphus Prince, was born on April 24, 1952. Following high school, Dolph enrolled in classes at The City College of New York, while his passion for singing continued. Eventually, he was signed to professional recording contracts by several labels, including Strand, King and Tivoli. Strand Records released his single, Nobody Understands Me, and dubbed Dolph “a new star on the horizon.” In 1959, Jet Magazine reported that the single was “winning disc jockey attention and praise,” and on July 27 of that same year, Billboard Magazine described the record as an “impressive wax debut.” As a professional singer, Dolph shared a talent manager with the well-known comedian, Jackie Gleason. One of Dolph’s greatest moments as a singer was performing on the stage of the world-famous Apollo Theater in Harlem, where he held the record for 14 consecutive wins at its popular Amateur Night event. This honor earned him the opportunity to perform as the opening act for Della Reese. Following his singing career, Dolph embarked on a highly successful career as a salesman in New York City’s fashion industry. In 1962, he and his wife moved from Harlem to a home in South Ozone Park, Queens, where they lived on the same block as several other family members. On June 17, 1963, they welcomed their second son, David Alexander Prince. For many years, Dolph commuted from Queens to Manhattan’s Garment District for work. He formed many lifelong friendships during his career in fashion. Naturally, Dolph was known for his impeccable style and cool demeanor. In 1975, the New York Beat column lauded his promotion to Vice President for Picture Frocks Inc., which earned him the honor of being the “highest-ranking Black officer in the billion-dollar garment industry.” After acquiring several years of experience in the industry, Dolph branched out and became an entrepreneur, founding a company named after his eldest grandson, T.J. During retirement, Dolph was fond of tending his garden, entertaining company in his backyard in New York and watching his favorite sports, tennis and ice skating, on television. In 2012, Dolph and Pat relocated from their home of 50 years to live with their son and daughter-in-law, Tony and Kim, in the Atlanta suburbs of Alpharetta, Georgia. In Georgia, Dolph stayed in touch with family and friends by texting and maintaining an active Facebook account, which proved that he remained one cool guy, even as an octogenarian! Dolph was pre-deceased by his beloved mother, Lillian and sister, Viola. He is survived by his loving wife, Patricia, two sons, Tony and David, daughter-in-law, Kim, four grandchildren, Angela (Corey), T.J. (Misty), Brian and Julian, seven great-grandchildren, Justin, Cameron, Andre, Julian, Jadess, Luke & Gemma, his younger sister, Patricia Prince-Mueller (Michael), nieces, Fabienne (Herb) Brooks and Monica (Raymond) Terry, nephew, John Wood (Annette), and countless other treasured family members and friends. In lieu of flowers, those who so desire may make memorial donations in memory of Dolph to the COPD Foundation at copdfoundation.org/donate or at 3300 Ponce de Leon Blvd., Miami, FL 33134.

The family of Mr. Adolphus B Prince created this Life Tributes page to make it easy to share your memories.

Adolphus Brooklyn Prince was born on February 5, 1934, in Washington,...

Send flowers to the Prince family.