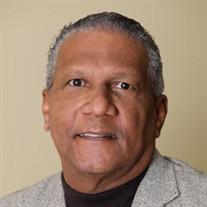 Anthony Adolphus Prince arrived on April 24, 1952, in Harlem, New York, and was the first child born to his loving parents, Adolphus Brooklyn and Patricia Yvonne Prince. From his earliest days, Tony was surrounded by a close-knit family, including both of his grandmothers, Lillian and Emma, and several aunts, uncles and cousins. At the age of 11, Tony and his parents moved from their apartment on 148th Street and Amsterdam Avenue to a single-family home in Queens, on the same block as his mother’s sisters, Elma and Juanita, and her brother, John. As a child, Tony played the trumpet and loved playing stickball. He also followed in his parents’ footsteps and briefly modeled until it became apparent that he would be taller than most of his peers! On June 17, 1963, Tony became a proud older brother to David Alexander Prince. As a teenager, Tony and 7 of his closest friends formed a social club, the Omega 8, and they would throw parties and fun events. He attended Bishop McLoughlin Memorial High School in Brooklyn, New York, with his first cousins and best friends, Johnnie Curtis and Mickey Dowery. After growing six inches the summer between his freshman and sophomore years, the varsity basketball coach approached Tony in the hallway and his hoop dreams began. In 1969, Jet Magazine announced that at 6-foot, 7 inches, Tony was offered basketball scholarships at four universities and had graduated from high school with honors. Ultimately, he attended St. John’s University not far from his home in Queens, New York. At St. John’s, Tony was an all-time basketball letter winner in 1971-1973, and graduated with a B.S. in marketing and also attended graduate school. He was fondly remembered as a great guy and a terrific teammate who was always looking to have a good laugh. On his birthday in 1973, he was selected in Round 17 of the NBA draft by the Philadelphia Sixers, which traded him to the New York Nets, when he famously lost his spot on the roster to his friend, Julius Erving aka Dr. J. In the summers, he loved to play in the Rucker Park league in Harlem as well as at “The Cage” courts on West 4th Street in Greenwich Village. In September 1973, Tony married Kathy Bunkley, and from their union, his only daughter, Angela Yvonne, was born. Tony started his career in 1977 with General Motors as a district sales manager in Boston and then Philadelphia, where he met his soulmate and wife of nearly 35 years, Kim. At GM, he developed through his 25-year career to various senior executive marketing positions. In 1986, Tony and Kim relocated to Michigan, where his first son, Anthony Prince, Jr. (TJ) was born on August 27. Subsequently, Tony was promoted again, and the family relocated to Southern California, where his youngest child, Brian Alexander Prince, was born on March 12, 1989. Between 1993 and 1999, the family relocated to his native New York and then to his final home in the greater Atlanta area. In 1996, Tony completed the executive graduate program at Carnegie Mellon University Tepper School of Business. Eventually, he left GM as a Zone Manager, and aspired to have his own franchise, a UPS Store location in Roswell, Georgia. In recent years, Tony decided to use his marketing and consulting skills to concentrate on the growing field of health and life insurance, and served as an Advisor and Field Trainer for The IPA Family. Over the years, Tony was well-loved by family and friends alike and was known for his “gentle giant” and generous demeanor. He rarely raised his voice, except when watching basketball and football on TV, his frequent pastime along with playing golf. He was an especially proud and doting father and grandfather. In 2012, Tony’s parents, Pat and Dolph, relocated from their home of 50 years to live with him and his family in the Atlanta suburbs of Alpharetta, Georgia, and he was a dutiful caretaker to them both. Tony passed away in the early morning of November 10, 2021. In 2020, he was pre-deceased by his father, Dolph, and his younger brother, David, and his mother, Patricia, passed away in July 2021. Tony is survived by his loving wife, Kim, his children, Angela (Corey), T.J. (Misty) and Brian, nephew, Julian, seven grandchildren, Justin, Cameron, Andre, Julian, Jadess, Luke and Gemma, several cousins, aunts, Patricia Prince, Rosemary Stevens and Harriet Braithwaite, and a host of cherished family members and friends. In lieu of flowers, the family welcomes donations in the memory of Tony Prince to the basketball program at his beloved alma mater, St. John’s University, at www.stjohns.edu/tonyprince.

Anthony Adolphus Prince arrived on April 24, 1952, in Harlem, New York, and was the first child born to his loving parents, Adolphus Brooklyn and Patricia Yvonne Prince. From his earliest days, Tony was surrounded by a close-knit family, including... View Obituary & Service Information

The family of Mr. Anthony A. Prince created this Life Tributes page to make it easy to share your memories.

Send flowers to the Prince family.