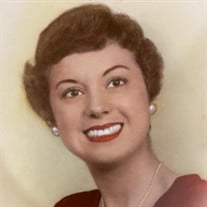 Barbara Estelle Grandy Collins went to be with our Lord on October 7th, 2020 after a period of declining health. She spent her final days and hours peacefully surrounded by loving care givers and her family. Barbara Estelle Grandy was born February 27,1931 in Orlando, FL. She was the only child of the late Sydney Mauldin Grandy and Cynthia Louise Barton, both from South Carolina. As a young child, they relocated to Decatur, GA where she spent the rest of her childhood until leaving for college in 1949. Barbara loved sports and often played as the star pick on the boys’ neighborhood baseball teams. As a teenager, Barbara played tennis and badminton at the Atlanta Athletic Club (Eastlake), and in 1948 she represented the club at the Junior National Badminton tournament in Connecticut. Barbara graduated from Decatur Girls Highschool in 1949 and Brenau University in Gainesville, GA in 1952. She held many positions while in college including President of Pan-Hellenic Council, President of Alpha Gamma Delta Fraternity, Senior “Y” Cabinet and Senior Class Officer. In December 1951, Barbara wed Robert Alan (Bobby) Collins of Atlanta, while on a 3-day leave from Air Force training in Biloxi, MS. Bobby then returned to Keesler AFB, while she completed her degree at Brenau. While Bobby was deployed to Japan as an Air Traffic Controller during the Korean war, she returned to Decatur and worked for Bell Telephone Company as a line’s developer. After Bobby completed his tour of duty, they relocated to Biggs AFB in EL Paso, TX where he finished his service. In 1954, they purchased their first home on North Hills Drive in Decatur, GA and then relocated to Dunwoody, GA in 1963. Barbara played A level ALTA tennis at Dunwoody Country Club for many years and for 2 years was also their “volunteer” tennis pro. She later learned to enjoy the game of golf alongside her husband and friends. Barbara and Bobby had many hobbies and interests including family camping trips with their 2 children, Diane and Alan. They traveled to S. Georgia; Florida; Cherokee, N. Carolina; Williamsburg, VA; and Bar Harbor, Maine in their Coleman camper. She also enjoyed gardening, cooking, bridge and dancing. She was a proud member of the National Society, Daughters of the American Revolution. She and Bob-by were charter members of Saint Luke’s Presbyterian Church in Dun-woody. In January 1970, Bobby and Barbara purchased a vacation house on beautiful Lake Burton in N. Georgia. This became their love and a highlight of their life’s work. They spent many years there enjoying the spectacular lake and mountain views while “fixing up” and adding onto the house several times, entertaining friends and family, and just relaxing. In 2011, the house was destroyed during a spring tornado outbreak. The few remains of the house were shown on the front page of the “Clayton Tribune” newspaper. Their family re-built in 2012 and continues to enjoy all its beauty and assets today. After 33 wonderful years in Dunwoody, Bobby and Barbara decided to make Amelia Island, FL their retirement home and made the move in the summer of 1996. They were active members of First Presbyterian Church, Fernandina Beach, and she enjoyed her new DAR chapter and continued playing tennis and golf with the ladies’ groups. Barbara and Bobby celebrated their 50th wedding anniversary in December 2001. Barbara enjoyed a wonderful 15 years on Amelia Is-land before returning to Atlanta in 2011 to be closer to her 2 children and their families. Barbara spent several years at Chambrell Senior Retirement community and her final 2 ½ years at Arbor Terrace-Crabapple Assist-ed Living Community. She was a bright personality there that loved the movie nights, exercise activities, wine and cheese socials, and wonderful faces that greeted and helped her each day. She was the proud winner and then co-winner of the annual “Master’s” putt-putt championship held each spring to honor the famous golf tournament. She was proceeded in death by her husband, Bobby, in 2008. She is survived by her daughter, Diane Collins Hishta (Kevin), son Robert (Alan) Collins Jr. (Heather), grandchildren Kelly Hishta Birkenhauer (Nick), Emily Hishta Cohen (Joel), Julia Collins Holley (Karsan), Henry Alan Collins, and great-grandchildren Charlie, Bobby, and Patrick Birkenhauer, and Rose Cohen. Memorial Services will be held next spring on Amelia Island where she will rest next to her husband. Donations can be made to The Amelia Island Museum of History, Lake Burton Civic Association, or any charity dear to your heart in her honor.

The family of Barbara Collins created this Life Tributes page to make it easy to share your memories.

Barbara Estelle Grandy Collins went to be with our Lord on October...

Send flowers to the Collins family.