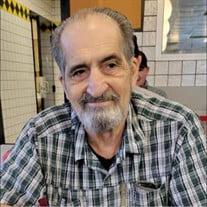 William Travers Mello Jr (Bill) of Alpharetta Georgia passed away Sunday April 24, 2022 at Northside Forsyth Hospital in Cumming, GA. He was 78 years old. Bill was born to William Travers Mello Sr and Cidaliza Mello (Souza) in Cambridge, Massachusetts where he lived along with his sister Lois until high school when the family moved to Stoneham, Massachusetts and met his future wife, Janet Fillipone. After High School, he began his career as a pole climber for Bell Telephone, staying with the company for several decades eventually retiring as a systems engineer. After retirement Bill continued to put those skills to use, spending over a decade supporting the information systems at Frisbie Memorial Hospital. A dedicated father and provider, Bill was the devoted husband to Janet Helen Mello, his wife for the past 52 years, raising a family, carrying for each other until Janet’ passing this past winter. He was a devoted father to his son William T Mello III and his wife Carri Mello of Northwood, NH, his son Robert Mello and his wife Kim Mello of Alpharetta GA, as well as his son Chris Mello of Atlanta GA and daughter Allison Mello of Exeter NH. He was also the cherished grandfather of Olivia Mello, Cecilia Mello, Natalie Mello, Emily Cunningham and Madison Cunningham as well as many cousins, godchildren, nieces and nephews. Bill worked tirelessly and gladly sacrificed himself for the betterment of his family and those he loved, as such he had a profound impact often leaving those around him in awe of his dedication to family. His passions included fishing, boating, Classic Cars and auto-racing. He was a lifetime member of Oriental Reading Classic Car Club in Massachusetts as well as a devoted Catholic and an active member of St Thomas Aquinas Catholic Church in Alpharetta GA. Funeral services will be held on May 5th beginning with visiting hours from 11 AM -1 PM at Northside Chapel Funeral Home at 12050 Crabapple Rd Roswell GA, followed by the funeral at 2 PM at St. Thomas Aquinas Catholic Church at 535 Rucker Rd Alpharetta GA and internment at Greenlawn Cemetery 950 Mansell Rd Roswell GA. In lieu of flowers, the family requests a donation be made to The American Cancer Society.

The family of Mr. Bill Mello created this Life Tributes page to make it easy to share your memories.

Send flowers to the Mello family.