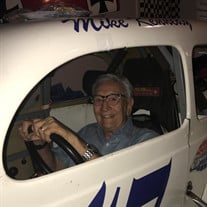 Not sure what to send?

It is with great sadness that we must announce the death of Bruce Cuthbertson. He passed away peacefully in his home on April 24, 2022 after fighting interstitial lung disease for several years. His life of 93 years began in Durban, South Africa, where he was born on January 18, 1929. After his parents’ divorce in his early childhood, most of Bruce’s youth was spent at boarding school. At the age of 16, Bruce left high school and joined the Naval reserves. At night, he attended the Natal technical college where he apprenticed as a mechanic. Bruce left South Africa for Southern Rhodesia (now Zimbabwe) in 1950 and worked repairing tractors. In 1954, he moved again, this time to Ndola, Northern Rhodesia (now Zambia). It was while living here he would meet his future wife, Ann, through a mutual friend. Bruce was so enamored that he asked Ann, who was in town to visit family, to extend her vacation for a week; the rest was history. Bruce and Ann were married a few months later on December 17, 1954. Bruce continued to live in Ndola for several years, and adopted two sons Alan and Brent. Bruce immigrated with his family to Winnipeg, Manitoba (Canada) in 1966 to work in manufacturing. This is where the family adopted Debbie, Bruce’s third child and only daughter. Bruce’s career would eventually lead him to Macon, Georgia to run a plant producing large bulk bags. He retired in 1994 and spent his final years living in Alpharetta, Georgia so he could be closer to his family. Bruce was preceded in death by his son Brent and wife Ann, but will be deeply missed by his daughter Debbie, son Alan, and two grandchildren Cole and Quinn. Bruce was known for his joyous personality and was loved by all who knew him. His memorial service will be held at Alpharetta United Methodist Church at 11:00 A.M. on Friday, May 27. In lieu of flowers, donations may be made in his name to the Juvenile Diabetes Research Foundation (JDRF).

It is with great sadness that we must announce the death of Bruce Cuthbertson. He passed away peacefully in his home on April 24, 2022 after fighting interstitial lung disease for several years. His life of 93 years began in Durban, South... View Obituary & Service Information

The family of Mr. Bruce Cuthbertson created this Life Tributes page to make it easy to share your memories.

It is with great sadness that we must announce the death of Bruce...