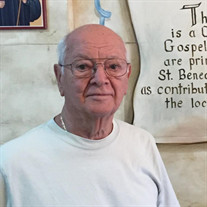 Carl LePere, devoted husband, father and grandfather died peacefully Thursday April 7th, 2022 in Woodstock, GA. He was 94 years old. Carl was born in Bronx, NY in 1928 to Carl and Lucy LePere, both of proud Italian heritage. In his early teens Carl moved with his family to Brewster, NY. and at the age of 17 entered the Navy. He was in the Navy Seabee’s from 1945 until 1947, stationed in Oxnard, CA. where he worked as a trainer in the motor generator school. After his service in the Navy, Carl worked for New York State Electric and Gas for nearly 40 years. During that time he was a volunteer fireman at the Brewster Fire Department, as well as a member of the Knights Of Columbus at St. Lawrence O’Toole parish. Following his retirement, Carl and his wife Clare moved to Melbourne, FL where they spent 15 years and shared wonderful memories. They then moved to Madison, GA and eventually to Woodstock, GA where he was a parishioner of St. Peter Chanel Catholic Church in Roswell. Carl was a lover of all things automotive and enjoyed restoring his 1925 Model T Ford. He also enjoyed carving, especially angels, which he gave generously to so many. Carl is survived by his wife of 66 years, Clare LePere, daughter Joann Mazurek and her husband Tom, daughter Michele Sterling and her husband Edward, son Thomas LePere and his spouse David Fitzgerald, daughter Karen Zuanelli and her husband Carl and his grandchildren, Megan Sterling Pabon (Sean), Michael Sterling, Alexandra and Catherine Mazurek, Carl, GianThomas, Sebastian and Clare Zuanelli. A funeral mass will be held on Friday April 22, 2022 at 10:30 am at St. Peter Chanel Catholic Church in Roswell, GA. Interment will take place at the Georgia National Cemetery at a later date. In Lieu of flowers, donations can be made to the Alzheimer's Association.

The family of Mr. Carl LePere created this Life Tributes page to make it easy to share your memories.

Send flowers to the LePere family.