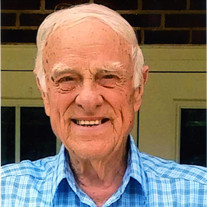 It is with great sadness that the family announces the passing of Carroll Emmett Byers, 93, of Alpharetta. He passed peacefully at home on Friday, October 15, 2021 after a well fought battle with Dementia and Covid related complications. Carroll was born in Alpharetta, Ga., on February 21, 1928, one of four children raised by his parents Paul and Maddie Byers, in the Alpharetta/Ocee/Shakerag community. Carroll graduated from Milton High School where he was a member of Future Farmers of America and help construct the log cabin now being preserved by the Alpharetta Historical Society. After high school Carroll enlisted in the U.S. Navy and served on the island of Guam. Carroll returned to the Roswell/Alpharetta area and began working in the furniture industry. He was touted as “one of the youngest, most up-to-date businessman in Roswell in the 50’s and 60’s,” according to the Roswell Neighbor newspaper. His original furniture store was on Canton Street in Roswell. He later built a new store, Byers Furniture located on Alpharetta Highway. People came from all over the North Atlanta area to buy furniture from him. He made it a practice to only take cash or checks. Carroll would often tell customers to drop the payment by later if there didn’t have cash or a check with them. Carroll delivered most of his furniture he sold himself in his pickup truck. After working in the store each day, Carroll left the store to go visit his beloved cows on his farm in Alpharetta. He named his cows and knew them by sight, often making extra trips by the farm to bring them treats, like sweet hay. Carroll was very charismatic and never met a stranger, mostly because he knew everyone on the area. He has a big smile and the charm to go with it. Carroll loved being with people, whether it be a small gathering or a large crowd. He enjoyed watching football games on tv with friends and making friendly wagers on the outcome. Carroll is survived by his long-time life partner, LaTroy Strickland, her daughter, Lindsey Strickland, granddaughters, Katie Gallagher and Emily Bartlett, and four great-grandchildren. He is also survived by his youngest brother, Gerald Byers, and his sister, Evelyn Byers. Carroll was preceded in death by his parents, Paul and Maddie Byers, his wife, Frances Byers, his son, Richard Byers, his daughter, Susan Byers Gallagher and his brother Calvin Byers. Funeral arrangements are being made with Northside Chapel Funeral Directors. The family is requesting that everyone attending services please wear a mask. Visitation for family and friends will be held Monday evening, October 18 from 5;00pm – 7:00pm at Northside Chapel Funeral Directors located at 12050 Crabapple Road, Roswell, Ga. Funeral services will take place at Alpharetta First Baptist Church located at 44 Academy Street, Alpharetta on Tuesday, October 19 at 11:30am to be followed by a graveside service at Green Lawn Cemetery in Roswell. In lieu of flowers the family is requesting donations be made to the Richard C. Byers Memorial Scholarship Fund, c/o Alpharetta First Baptist Church, 44 Academy Street, Alpharetta, Ga. 30009.

It is with great sadness that the family announces the passing of Carroll Emmett Byers, 93, of Alpharetta. He passed peacefully at home on Friday, October 15, 2021 after a well fought battle with Dementia and Covid related complications. Carroll... View Obituary & Service Information

The family of Mr. Carroll E. Byers created this Life Tributes page to make it easy to share your memories.

It is with great sadness that the family announces the passing...

Send flowers to the Byers family.