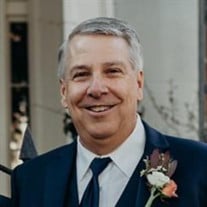 Christopher (Chris) Arden Holcomb a.k.a. “Hook” of 12391 Crabapple Meadow Way, Alpharetta, Georgia, unexpectedly passed away on Thursday evening, September 30, 2021 at the age of 64. He was born on July 15, 1957 in Waynesboro, Virginia. Chris was a devoted husband, father, grandfather, brother, uncle, brother-in-law, and friend. He was a man of great morals; he was loyal, dependable, caring, and loving. It was said often that Chris should have had his own TV show because of his reputation for knowing how to do and fix anything. He was always willing to teach and share his talents with others. He had a wide range of interests including tennis, motorcycles, wakeboarding, fishing, boating, skiing, car racing, bike racing, hiking and way too many others to name. In 1982, he moved to Atlanta where he received his Bachelor’s degree. He then married his wife, Gloria, in 1984 and began his career at Management Science America. Later he was employed with Blue Circle Cement and for the last 17 years with Lockheed Martin as a Network Engineer. He was preceded in death by his parents Kathryn Green Holcomb and Robert Anson Holcomb and his sister Barbara Lou Holcomb. Surviving are his wife of 37 years, Gloria McCormick Holcomb, his sons Ryan with his wife Amy and Austin with his fiancé Ludwika Pankowska, his grandson Hansford, his brother Scott with his wife Rosemary, his nephew and multiple nieces. A celebration of Chris’s life will be held at 2:00 pm on October 9th 2021 at Northside Chapel, 12050 Crabapple Road, Roswell, GA. His final resting place will be in Waynesboro, Virginia close to his beloved Blue Ridge Mountains within the foothills of the Shenandoah Valley. Memorials can be made by sending flowers to Northside Chapel Funeral Directors and Crematory for his service or donations to Children’s Healthcare of Atlanta via“give.choa.org”.

The family of Mr. Christopher A. Holcomb created this Life Tributes page to make it easy to share your memories.

Send flowers to the Holcomb family.