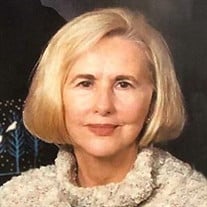 Mrs. Constance Naslund Cunningham, daughter of the late Clarence Le Roy Naslund and Matilda Josephine Dress, passed on at the age of 84 during the early morning of Sunday, May 3rd 2020. She transitioned quietly in her sleep, venturing home and into the arms of her beloved Lord. Connie was born during the depression on January 13th 1936 in Dubuque, Iowa. Her second generation Swedish and Luxembourg parents struggled and eventually found work in Ephrata, Washington when she was 6 years old. As her father worked in a wartime aircraft factory along with a second job as a music instructor and her mother at a local drug store, Connie and her sister Carol spent their elementary and high school years at the St. Joseph's Academy Catholic Boarding School in Sprague, Washington. Upon graduation, she spent several years attending college and working as an account administrator for the Bell Telephone Company in Seattle. It was there that she met the love of her life Robert (Bob) Cunningham Jr. of Hendersonville, North Carolina while he was an officer and naval aviator candidate at Naval Station Puget Sound. They married on February 27th 1960 in King, Washington. Connie and Bob spent a brief time in Oakland California, and then eventually moved to Columbia, South Carolina and Jacksonville, Florida; finally returning to her husband's hometown of Hendersonville, in 1968. The couple resided and raised a family in Laurel Park, Towne Forest and Horse Shoe over a span of five decades. Connie was active in the Immaculate Conception Catholic Church of Hendersonville, and enjoyed gardening, golfing, tennis, hiking, cooking and entertaining, ministering to the needs of those in elder care homes, as well as acting hostess for games of contract bridge. She was an avid painter, dog lover and member of several favorite Bible study groups. She departs a large family of loved ones. Connie was preceded in death by her husband Robert G. Cunningham, Jr as well as her her sister Carol Groom and brother-in-law Ralph Groom. She leaves behind one brother Charles Naslund of Okaloosa, Florida. She will be forever cherished by her two children, Roger Cunningham (Lee Ann) of Milton, Georgia, Brad Cunningham (Marcella) of Lexington, South Carolina, along with four very loved grandchildren Mitchell, Ann Marie, Timothy and Lauren. In addition she departs her beloved family of thirteen nieces and nephews and six brothers and sisters-in-law. A small family ceremony was held at Northside Chapel in Alpharetta, Georgia, while a celebration of Connie's life will be held at Shepherd Memorial Park Chapel, where her ashes are to be interred in late June. Specific time and date are to be determined, but will be subject to Covid-19 lockdown conditions. In lieu of flowers it is requested that donations be made to The Immaculate Conception Catholic Church of Hendersonville, North Carolina, or the Humane Society of Henderson County.

Mrs. Constance Naslund Cunningham, daughter of the late Clarence Le Roy Naslund and Matilda Josephine Dress, passed on at the age of 84 during the early morning of Sunday, May 3rd 2020. She transitioned quietly in her sleep, venturing home and... View Obituary & Service Information

The family of Mrs. Constance Naslund Cunningham created this Life Tributes page to make it easy to share your memories.

Send flowers to the Cunningham family.