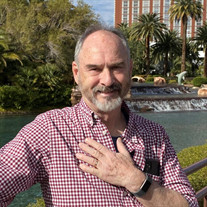 Beloved father, husband, brother, uncle, and friend, Daniel Thomas Crawford, of Suwanee, Georgia passed away on April 6, 2022. He was–true to form–in good spirits and making Hitchhiker’s Guide to the Galaxy jokes before his sudden passing. Born in Washington, D.C. to Gerard Crawford and Marion Quinney Crawford, he spent his childhood in Dover, New Hampshire and Springvale, Maine, moving later with his family to Puerto Rico and Miami, Florida. It was there he earned a Bachelor of Science in Electrical Engineering from the University of Miami, realizing an interest begun at an early age with carefully-constructed balsa wood planes flying out a third-floor window of the house in Maine. He had a long and successful career in engineering. Humorous, generous, and loyal, Dan was a lover of nature and family and the ultimate friend. He enjoyed walking, hiking, sci-fi (especially Dune), learning anything and everything about history, and most especially his rescue dogs: Coal, who he lost in 2016, and Pancho Villa. He enjoyed decorating the house, especially at Halloween and Christmas, and his decorations made him famous throughout the neighborhood. He will be profoundly missed. He is survived by his wife, Denise Wallace, his daughter, Cassie Crawford (and grand-dogs Huckleberry and Josie), and many nieces and nephews. One of sixteen children, he is predeceased by siblings Andrew Crawford, Nathaniel Crawford, Charles Crawford, Judith Crawford, Martha Bernard, and Sarah Crawford, and survived by Gerard Crawford, Christopher Crawford, Benjamin Crawford, Marion Sentiff, Hannah Alvardo, Matthew Crawford, John Crawford, David Crawford, and James Crawford, and their families. A celebration of his life and memorial service will be held on Saturday, April 16 at 2pm, at Northside Chapel, 12050 Crabapple Rd, Roswell, GA 30075. The family will receive friends on Friday, April 15, between 5-8pm, also at Northside Chapel. In lieu of flowers–and following Dan’s example–the family prefers that friends make donations to one of the following animal rescue groups: ● Fur Kids, a no-kill shelter in Atlanta that rescues more than 5,000 animals each year. https://furkids.org/donate/ ● Angels Among Us Pet Rescue, in Alpharetta, which saves dogs and cats from shelters and high-risk situations. https://angelsrescue.org/donate/

The family of Mr. Daniel Thomas Crawford created this Life Tributes page to make it easy to share your memories.