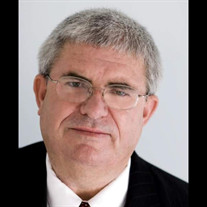 Roswell, Georgia - David Eugene Havice passed unexpectedly into God’s presence after a brief illness on May 3, 2022, 6 weeks after the death of his beloved wife. David was born in Ohio and grew up in South Carolina with his parents Don and Judy and brother Mike. After high school he briefly pursued studying music before joining the Navy where he served on the USS Lexington. He then received his degree from Liberty Bible College in Pensacola, Florida and began his career in ministry, serving as an ordained minister and missionary. While still in the Navy David met the love of his life, Nodya. After a 3 week courtship they married on October 1, 1972 and were happily married for 49 years and raised two daughters, Beka and Judith. David had three passions, music, family and ministering to others. He was an accomplished musician and could play any instrument with excellence but was most at home on the piano. He was a wonderful husband and father and grandfather and served in churches in both America and Scotland. He loved and encouraged people right to the very end. He is preceded in death by his wife, Nodya, parents Don and Judy Havice, in laws Steve and Betty Stephens and grandson Owen Luke Beccue. David is survived by his treasured daughters Rebekah Havice and Judith Brock-Traynor (Brian Traynor), brother Michael (Terri) Havice, brother in law Joe (LeAnne) Stephens. He was Grandad to Curt Beccue, Mitchell Beccue, Ella Beccue, Jenna Brock, Jonah Brock, Joel Brock and Joseph Brock, David Traynor, Matthew Traynor and Noah Traynor and he was a proud uncle to Matthew (Laurie) Havice, Sarah (Matt) Rochester, BJ (Robyn) Stephens and Tricia (Erik) Sealy and loved aunts and uncles in South Carolina. A celebration of life service will be held Monday, May 9 at 11:00 am at Northside Chapel, 12050 Crabapple Rd, Roswell, GA. Visitation is at 10 am.

Roswell, Georgia - David Eugene Havice passed unexpectedly into God&#8217;s presence after a brief illness on May 3, 2022, 6 weeks after the death of his beloved wife. David was born in Ohio and grew up in South Carolina with his parents Don... View Obituary & Service Information

The family of Mr. David Eugene Havice created this Life Tributes page to make it easy to share your memories.

Send flowers to the Havice family.