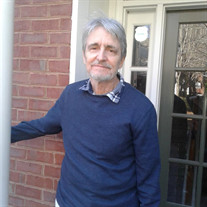 Beloved brother David P. Studtmann, age 77, of Roswell, GA passed away at 1:25 a.m. on Wednesday, January 13, 2021, after testing positive for COVID-19. He was born on October 9, 1943, in Muskogee, OK, the son of the late Rev. Martin and Ruth (Manz) Studtmann. He lived in Kingsville, Texas, Belleville, Illinois, Marion, Iowa, and Chicago, Illinois before moving to Georgia. David received his master’s degree in Landscape Architecture from the University of Illinois in Champaign/Urbana after completing his undergraduate degree in History from the University of Iowa. Prior to heading south to Georgia, he worked as an Investigator for the Chicago Commodities Exchange. Upon arriving in the Atlanta area, he worked for several years in urban planning for the city before starting his own landscape architecture company. Living in the Inman Park/Little 5 Points area of Atlanta provided many landscaping opportunities for homes there and in Decatur. David was active in the Inman Park Neighborhood Association, an organization which is important to the city as it preserves the neighborhoods. Community involvement and activities were a big part of David’s life. He believed that hard labor and active collaboration kept neighborhoods resident friendly. This included protesting proposed road construction that would have removed old growth trees in the area. Another closely related activity was raising money and volunteering for the Inman Park Festival which began in the early 1970s for the purpose of revitalizing the community. Additionally, he served on the board of Sevananda Natural Food Coop, advocated for Bond Credit Union, and volunteered his landscaping services to some non-profit organizations, such as The Open-Door Community, an organization which assists the homeless with meals, housing, and employment. For many years, David enjoyed singing in the choir at Messiah Lutheran Church in Decatur, Georgia and formed friendships through that avenue. He shared close relationships through a long- standing small Men’s Group that met to discuss current issues and socialize. Immediate and extended family played an important part in David’s life which included fun times with his nieces and nephews and connections with cousins in other parts of the country. Recreational parts of his life included swimming, yoga, dance lessons, walking in his neighborhood, and brewing beer! His love of family, friends, community, and care staff was expressed though his words of affirmation, sense of humor. and by his ever-present smile, singing, and whistling. One of his close friends summed up his life as “living the gospel” as he always looked for the best in people. After his retirement, he moved to the Roswell area to be closer to his sister Sue where he became a member of Cross of Life Lutheran Church in Roswell. David is survived by his sister, Susan Studtmann Henning, of Roswell, GA, his brother, Mark Studtmann (Mary) of Belleville, IL; niece, Rachel Henning Fitzpatrick (Timothy) of Austin, TX; nephew, Matthew Studtmann of Belleville, IL; niece, Heidi Studtmann Klein (Eric), grandniece, Grace Klein and grandnephew, Luke Klein all of Columbia, IL, and numerous cousins. He is preceded in death by his parents, Martin and Ruth, brother, Ronald, sister-in-law, Carol and sister-in law Helen. A private family service will be at Cross of Life Lutheran Church on January 30, 2021. A memorial service is being planned to celebrate David’s life later this Spring, 2021 near Inman Park neighborhood in Atlanta. In lieu of flowers a memorial gift may be made to: 1.Cross of Life Lutheran Church for “David Studtmann Memorial Fund” to be used for landscaping around the church property. https://www.eservicepayments.com/cgi-bin/Vanco_ver3.vps?appver3=P6WaoIptQ3nQMV58SHza1Uhj2C1f_9zMqNOpgk0bloZ1RJHt8ghBReJL20JKlGGulPSo2YYlFwSJdgfR5SLGmwoM775LPTle6eIpyfOvYdv5p98qh4jf7JLqjMZ_Ybb4s1aNnx2iWBwDNLwlGAob8ArQd-xBnXQNdUvzdNfCGZo=&ver=3 2. Or, a gift may be made “in honor of David Studtmann” to The Open Door Community, now in Baltimore, Maryland via personal check to: The Open Door Community, PO Box 10980, Baltimore, Maryland 21234. Any questions, call David Payne, 404-290-2047

The family of Mr. David Paul Studtmann created this Life Tributes page to make it easy to share your memories.

Send flowers to the Studtmann family.