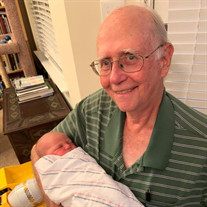 David “Dave” Arthur Ziegler of Roswell, Georgia, passed peacefully on July 28, 2020. Dave was born in Ellwood City, Pennsylvania, on December 20, 1945, to Arthur Ziegler and Gertrude Mohlin Ziegler. He often recalled fond memories of growing up with his cousins, whom he considered to be more like brothers, in his hometown of Zelienople, Pennsylvania. He graduated from Zelienople High School in 1963 before attending Eastern Michigan University, where he earned his bachelor’s degree in physics with a minor in mathematics. At Eastern Michigan, he participated in the Reserve Officer Training Corps (ROTC) program and was inducted into the National Society of Scabbard and Blade. He valued his experiences at college and made several lifelong friends. Following graduation in 1968, he entered the U.S. Army as a commissioned officer (second lieutenant) and was later promoted to captain. During his four years with the U.S. Army, he served in the 172nd Infantry Brigade at Fort Richardson, Alaska, and in the 25th Infantry Division at Cu Chi, South Vietnam. As part of 725th Maintenance Battalion (Company C, Ordinance Corp), he managed the third echelon repair operations and led “contact groups” supporting these infantry units in Dau Tieng and Bien Hoa. In November 1970, he returned to the U.S. for additional training at Aberdeen Proving Ground in Maryland, and was later assigned to the USA Armor Center at Fort Knox in Kentucky until he resigned from the U.S. Army on February 29, 1972. His travels with the military helped him develop a passion for photography. After serving his country, Dave attended Kent State University in Ohio to pursue a master’s degree in accounting. While riding the campus bus one day amidst hippies and grubby college students, he noticed a beautiful young woman who, as he told the story, “was the only one who looked like she had showered.” He struck up a conversation, and the rest is history. Kathi and Dave were married on December 22, 1973. Kathi and Dave were happily married for more than 46 years. Their first home was in Stow, Ohio, where Dave worked as an accountant at Terex Corporation. Dave and Kathi loved to entertain, often hosting parties and get-togethers with their close friends in the neighborhood. After the shutdown of the Terex plant in the early 1990s, Dave was hired as a controller in the finance department of Evenflo Products Company, Inc. The new job brought the family to Roswell, Georgia. Dave was skeptical of the red clay soil in Roswell until he noticed all of the gorgeous trees and flowers of the South. Gardening was Dave’s passion, and he spent much of his free time planting, weeding, pruning, and mowing. When he wasn’t perfecting his own garden, he loved to visit the Atlanta Botanical Garden and Gibbs Gardens with Kathi and would often encourage friends and family to join them. In 1999, Dave ended his 26-year career in finance and was able to devote more time to his family and his other interests, such as genealogical research, reading, and stock trading. Dave loved to go on drives through the mountains; he loved to sit on the beach; and he loved visiting historic sites, including cemeteries. Everywhere he went, Dave struck up conversations with strangers and won them over with his friendly demeanor, calm presence, and willingness to listen. More than anything, Dave loved the times he spent with his family and friends talking and laughing for hours. Dave will be remembered for his tenacious spirit, his hospitality, his sense of humor and laughter, his appreciation for history and genealogy, his steadfast attention to details, his in-depth discussions on current events, his desire to continuously learn, and his quiet, heartfelt wisdom. But mostly, he will be remembered for how he made everyone around him feel important and loved. Dave is survived by his wife, Kathleen (Kathi) Wilson Ziegler, daughters Sandra Kathleen Ziegler Turner (Jacob) and Linda Ziegler Niederhausen (Eric), and grandchildren Ephraim Levi Turner, Marian Rosalie Turner, and Julie Rose Niederhausen. Dave will be laid to rest at the Georgia National Cemetery in Canton. Due to the COVID-19 pandemic, a private graveside service for immediate family will be held on Thursday, August 6. A celebration of life in his garden will be scheduled for some time next year. Donations can be made in his memory to the Atlanta Botanical Garden at www.atlantabg.org, or the American Kidney Fund at www.kidneyfund.org.

The family of Mr. David A. Ziegler created this Life Tributes page to make it easy to share your memories.

Send flowers to the Ziegler family.