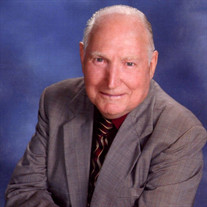 DeLOYD HARRISON, 94, of Ball Ground, GA, formerly of Alpharetta, GA, passed away January 27, 2022. Loyd, as he was known, was born in Cairo, GA on July 21, 1927 to Lee Roy and Sadie Saville Harrison. After his stint in the US Army, he moved to Alpharetta, GA where he met his Wife and procured a job at the General Motors Doraville Plant. He married Eleanor Greselda “Doodlebug” Asherbranner on June 11, 1955. They had two daughters, Charlotte and Angela, and later had three granddaughters, Jessica, Kayla and Kimberly then two great grandchildren, Kallie and Colton. Loyd was a longtime member of Bethany Baptist Church in Alpharetta, GA where he was a deacon, member of the choir, and had many cherished friends. He was considered a “Jack of all trades” and could and would do just about any repair anyone needed. He loved his family and his friends dearly. Loyd was employed at the GM Motors Plant until his retirement in 1982 after which his hobbies included hunting, gardening, and spending time with his family during his decades of living in the North Fulton area. He was predeceased in death by his parents Lee Roy and Sadie Harrison; wife Greselda Harrison; brothers Odus, Jim, and Cecil Harrison; father and mother in law Buford and Corene Asherbranner; brother in laws Bobby Asherbranner and Harry Reifenberg; sister in laws Gwen Wright, Sarah Harrison, and Mildred Harrison; niece Linda Reifenberg; nephews Mike Reifenberg, Roy Lee Harrison, and Neal Harrison. He is survived by daughters, Charlotte Nolan (Tim Nolan) and Angela Roberts; granddaughters Jessica Long, Kayla Reynolds (Jason Reynolds) and Kimberly Brown (Jason Brown); great grandchildren Kallie and Colton Reynolds; sister Inez Reifenberg; brother in laws Gerald Asherbranner and Calvin “Sonny” Wright; and several nieces and nephews. The family will receive guest Saturday January 29, 2022 from 5:00 to 7:00 pm and Sunday January 30, 2022 from 1:00 until the time of the funeral at 2:00 pm in the Funeral Home Chapel. Burial will follow at Green Lawn Cemetery, Roswell, GA. The family ask that everyone please obey social distancing and wear mask. In lieu of flowers the family request donations made to the charity of their choice.

DeLOYD HARRISON, 94, of Ball Ground, GA, formerly of Alpharetta, GA, passed away January 27, 2022. Loyd, as he was known, was born in Cairo, GA on July 21, 1927 to Lee Roy and Sadie Saville Harrison. After his stint in the US Army, he moved... View Obituary & Service Information

The family of Mr. DeLoyd Harrison created this Life Tributes page to make it easy to share your memories.

Send flowers to the Harrison family.