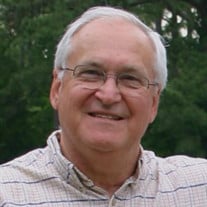 Don White, loving husband, father of 3 and Granddaddy to 11, passed away at the age of 76, after a short battle with colorectal cancer. Don was born in Fayette, AL to Freddie and Lonnell White. He spent most of his childhood years in Fayette. Many stories and fond memories are told about time spent with his grandparents in this North Alabama countryside, where many uncles, aunts, and cousins gathered for “Singings,” family get-togethers and mischief. Many of Don’s stories are told about these times. Don’s military father moved the family several times during his youth, but his formative years were in Tuskeegee and Auburn, AL, where he attended High School until his Senior year. Don’s dad was transferred to Leesville, Louisiana (Fort Polk) where Don graduated from high school and joined the Army National Guard at age 17. Don and family then returned to Auburn, where Don attended Auburn University, met and married Candy Reynolds, graduated from Auburn University with a Bachelor of Science in Business Administration and accepted a job with Sears Roebuck & Co. and began his career in Commercial Credit. He retired from Sears after 33 years of service. Many of his Sears friends have stayed in touch over the years with long phone calls of sharing memories. Don and Candy moved to Huntsville, AL, were transferred to Savannah, GA, where his two daughters were born and then to Athens, GA, where his son was born. After 9 years in Chattanooga, TN, he was transferred to Atlanta, GA, where his family made their home in Roswell. After retiring from Sears, he worked 3 years with IKON. Don had many hobbies. He was an avid beekeeper for many years and raised beautiful orchids that were enjoyed by many. In recent years, Don and Candy traveled the United States and loved visiting National and State Parks. As an active member of First Baptist Roswell for 36 years, he served as an usher for 34 years. He also served on the Counting Committee and had been a member of the “Fisher’s of Men” Sunday School Class. Don had a wide range of knowledge about history, business, finance, and trivia. This allowed him to carry on conversations with anyone, anywhere, and at anytime. He had a kind smile that captured hearts. Don was preceded in death by his parents, Freddie and Lonnell, two brothers, Jerry and Kevin, and sister, Sandra Hall (Mike). He is survived by his wife, Candy, his 3 children, Angela Hollander (Ross), Tina Folsom (Chris), and JJ White (Erika), his brother, Kyle and 11 grandchildren: Anna Grace White, Sarah Folsom Craven (Jeff), Caleb White, Abby Folsom, Megan Hollander, Austin Folsom, Julia White, Daniel Hollander, Carter Folsom, Natalie White, Luke White, as well as many loved cousins, nieces and nephews. Burial will be in Auburn at Memorial Park Cemetery with a family ceremony. A life celebration will be planned at a later date in Roswell. In lieu of flowers, donations may be given to the General Fund of First Baptist Roswell, 710 Mimosa Blvd, Roswell, GA 30075 or online at fbroswell.org/give or text 73256 to FBRoswell.

Don White, loving husband, father of 3 and Granddaddy to 11, passed away at the age of 76, after a short battle with colorectal cancer. Don was born in Fayette, AL to Freddie and Lonnell White. He spent most of his childhood years in Fayette.... View Obituary & Service Information

The family of Mr. Donald Sims White created this Life Tributes page to make it easy to share your memories.

Send flowers to the White family.