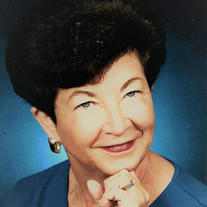 A service honoring the life of Donna Maria Hayes Dolive of Roswell, Georgia will be held at Northbrook United Methodist Church, 11225 Crabapple Road, Roswell, GA 30075, on Tuesday, July 6, 2021, at 4:00pm. Donna was born in Atlanta, Georgia on December 13, 1943. She was a member of the 2nd graduating class at Sandy Springs High School. Following high school Donna attended Tift College in Forsyth, Georgia, before marrying in June 1963 and becoming a mother in November 1964. Donna is survived by her husband of 58 years, Henry Delcamp Dolive, Jr. “Hank,” her son, Henry Delcamp Dolive III “Del,” daughter-in-law Terri Dolive, grandson Luke Dolive, granddaughter Renata Dolive Slaton (Daniel), and her best friend for 55 years, Pat Pinson Maddox. Though born an only child, when Donna married, she became the adored daughter-in-law and sister-in-law to her husband’s family and is survived by her brothers-and sisters-in law: John Dolive (Mary), Cathy Weiss (Terry), Mark Dolive (Juanita), Daniel Dolive (Melanie), Francie Dolive, and scores of nieces and nephews. She is also survived by her half-sister, Janette Bryant and two half-brothers, Jack, and Paul Childs. Over several decades, Donna performed the work that she loved the most – caring for young children and babies. She taught and cared for them at multiple churches throughout Atlanta, including Mt. Vernon Baptist Church, where she taught with her husband, St. James United Methodist Church, and Northbrook United Methodist Church, where she was long-time member. Donna enjoyed hosting family gatherings and had a true flair for entertaining. She was a perfect hostess at the countless luncheons and dinners she organized over the years. She took pride in her home, and was the definition of a true lady. Donna was a devoted child of her Lord and Saviour, Jesus Christ. She had a heart of loving and caring for others. She exemplified the words in the 31st chapter of Proverbs – the description of the virtuous woman… “a woman who fears the LORD is to be praised.”

The family of Mrs. Donna H. Dolive created this Life Tributes page to make it easy to share your memories.

A service honoring the life of Donna Maria Hayes Dolive of Roswell,...

Send flowers to the Dolive family.