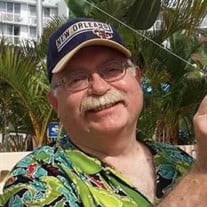 Edward Paul Neuberger, 71, of Milton, GA died on Saturday, October 10, 2020. He was born in Baltimore, MD, and graduated from Towson University. Beginning his career in Baltimore, he worked in a number of insurance companies over the years... View Obituary & Service Information

The family of Mr. Edward Paul Neuberger created this Life Tributes page to make it easy to share your memories.

Send flowers to the Neuberger family.