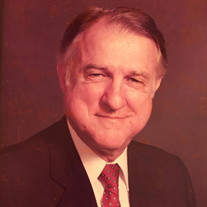 Dr. Forest D. Jones, age 94, of Roswell passed away on March 1, 2020. He was a loving husband, father and grandfather. He was born in Atlanta on February 26, 1926 to William and Katherine Jones and grew up in Fairburn. He attended Emory University and the Medical College of Georgia. He served his country for several years in the Navy at Camp Lejuene, caring for children on the base. On January 19, 1952 he married the love of his life, Marian Stross, and they enjoyed 68 years of marriage, spending 53 of those years raising a family in Decatur. Dr. Jones was a beloved pediatrician in the Atlanta area for 37 years, practicing for a time with his uncle, Dr. Tom Forest Davenport. Later, he served as Chief of Pediatrics at Crawford Long Hospital and was a founding partner of the Children’s Medical Group, a practice which still thrives today. His gentle kindness and humor will be missed by many, especially those friends at St. George Village community where he spent the past 15 years. He is survived by his loving wife, Marian S. Jones of Roswell; 2 brothers, William B. Jones, Jr. of Gainesville, and Charles H. Jones of Social Circle; 6 children, Stephen Jones (Alesia) of Marietta, Allen Jones (Evie) of Duluth, Scott Jones (Emily) of Decatur, Linda Henderson (Rick) of Peachtree Corners, Renee McDaniel (Tom) of Roswell and Cynthia Stone (Wayne) of Mandeville, LA; 16 grandchildren, Kristi Herndon, Robin Zoubek, Matthew Jones, Bennett, Ansley and Parker Jones, Gracie and Nicole Henderson, Carly Jones, Cassidy, Mallory and Connor McDaniel, Emily, Brett, Bryan and Haley Stone; 2 great- grandchildren along with numerous nieces, nephews and other extended family members. In lieu of flowers, donations may be made to St. Peter Chanel Catholic Church in Roswell and/or United Cerebral Palsy of Georgia. A funeral Mass in celebration of his life will be held on Monday, March 9, 2020 at 11:00AM at St. Peter Chanel Catholic Church with a reception following in the parish hall. A graveside service will follow at Arlington Memorial Park in Sandy Springs. The Jones family will receive friends on Sunday, March 8, 2020 from 2PM to 5PM at Northside Chapel Funeral Directors, Roswell, 770-645-1414. www.northsidechapel.com

Dr. Forest D. Jones, age 94, of Roswell passed away on March 1, 2020. He was a loving husband, father and grandfather. He was born in Atlanta on February 26, 1926 to William and Katherine Jones and grew up in Fairburn. He attended Emory University... View Obituary & Service Information

The family of Dr. Forest D. Jones created this Life Tributes page to make it easy to share your memories.

Send flowers to the Jones family.