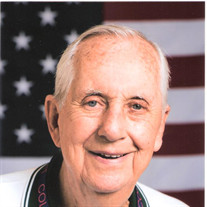 Frank Joseph Schiesser, Jr., (Pop Pop) went to be with his Lord Jesus on January 29, 2021. He was surrounded by his “Sweetie” of almost 65 years, Helen Anne (Garber) Schiesser, and other family members. Frank lived a long and full life, and was loved by his family, friends and everyone who was blessed to know him. He was born in Abington, PA on March 4, 1926; the third child and first son of Frank Joseph Schiesser, Sr. and Vera Ruth (Rice) Schiesser. Frank is survived by his wife, Helen, (married May 5th,1956); his children: Kimberly Swindall (Patrick, Sr.: deceased), Wendy Roy (Bret), Jay Schiesser, Peter Schiesser, Valerie Hoover (Donnie); his grandchildren, Kelley Vervroegen (Erik), Patrick Swindall, Jr., Meghan Greene (Brian), MacKenzie Swindall, Caitlin Dymeck (Stanley), Ryan Swindall (Erin), Molly Swindall, Camille Roy, Anna Roy, Brittni Hoover, Brianna Hoover, Brock Hoover; and his great grandchildren, Griffin Greene and Hunter Dymeck. Frank graduated from Upper Moreland High School in 1943, where he served as Captain of his basketball team, and was a member of the football and track teams. From 1944 to 1946, he served in the Army Air Corp as a Control Tower Operator in Nordholz, Germany. He graduated from Ursinus College in 1951 and Temple University School of Dentistry in 1955. He performed an Internship with the United States Public Health Service in 1955-1956 before starting his dental practice in Willow Grove, PA in September of 1956. In January of 1963, he co-founded Chesheim Dental Associates in Erdenheim, PA, where he practiced dentistry until his retirement in 1992. Beginning in 1958 and well into the 1980s, Frank taught at the Temple University School of Dentistry. Frank belonged to, served on and led numerous dental organizations. He co-authored “The Neutral Zone in Complete Dentures”, which was published in 1973. He and his co-author, Victor Beresin, taught hundreds of dental students and dentists in cities at home and abroad. Frank loved the beach and served as a lifeguard and Lieutenant of The Ocean City New Jersey Beach Patrol from 1943, 1947-1953. He and his partner won the doubles rowing championship in Ocean City 3 years in a row, earning them the right to keep the coveted John B. Kelly trophy. They also won the South Jersey Championships in 1950. In 1978, he was inducted into the Ocean City Beach Patrol Hall of Fame at which time he donated the trophy back to The OCBP. He and Helen loved to attend the annual beach patrol alumni weekends each year. An avid golfer, he served as President of Manufacturer’s Golf and Country Club from 1985 to 1987. However, he was never too busy to attend his children's games, matches or other events. His grandchildren have also been blessed by his participation in their lives. He spent many hours setting up a curriculum to teach them and others about how to live a balanced life based on: Worship, Love, Work and Play. This philosophy was developed by his yearly time spent at The L.D. Pankey Institute in Miami, FL, where he continued his dental education and developed close, lifelong friends who were part of the “Perennial Sophomores'' Group. As a result, Pop Pop’s classes are legendary among the members of the Schiesser Family. Frank was an active member in several churches during his lifetime and was determined that anyone he met would know about His Lord Jesus. This is why thousands of people now possess a little metal cross and short poem entitled “The Cross in My Pocket”. You are loved and are missed, Pop Pop, but there is no doubt that you were met at the Gates of Heaven with the words “Well Done, My Good and Faithful Servant!” A private family service for Frank will be held on Tuesday February 16, 2021 at First Baptist Church of Alpharetta at 10:00am. Frank will be buried with Military honors at Georgia National Cemetery in Canton, GA at 1:00pm on February 16. In lieu of flowers, the family requests that donations be sent to First Baptist Church of Alpharetta, 44 Academy Street, Alpharetta, GA 30009 / https://fbca.com/ or The Pankey Institute, 1 Crandon Boulevard, Key Biscayne FL 33149 / https://www.pankey.org/. The service will be live streamed. A link will be provided by February 15. Please check back.

Frank Joseph Schiesser, Jr., (Pop Pop) went to be with his Lord Jesus on January 29, 2021. He was surrounded by his &#8220;Sweetie&#8221; of almost 65 years, Helen Anne (Garber) Schiesser, and other family members. Frank lived a long and full... View Obituary & Service Information

The family of Dr. Frank J. Schiesser Jr. created this Life Tributes page to make it easy to share your memories.

Frank Joseph Schiesser, Jr., (Pop Pop) went to be with his Lord...