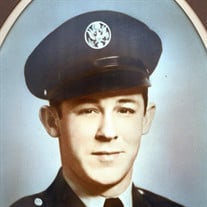 George Thomas Waldrop age 91 of Marietta passed away on September 20, 2021. He attended North Point Community Church. George graduated from Milton High School class of 1947 and Georgia State College class of 1959. He served in the U.S. Air Force from 1947-1953. He was a member of the Masonic Lodge and The Shriners. He was preceded in death by his parents, Joseph and Ozelle Waldrop, brothers, Charles W. Waldrop, Ernest C. Waldrop, and Joseph T. Waldrop; sisters, Estelle Coleman and Lee Ann Lively; and his firstborn son, Keith D. Waldrop.. He is survived by his wife, Betty Waldrop; sons, Terry Waldrop, Paul Waldrop and daughter-in-law, Susan Waldrop; granddaughters, Shannon Essex, Elizabeth Waldrop, Rachael Waldrop and Taylor Waldrop Lantiegne; great-granddaughters, Sophie Essex and Madeleine Essex; youngest brother, Robert Waldrop. In lieu of flowers, the family would encourage a donation to The Shriner’s Hospitals for Children (lovetotherescue.org). Funeral services will be held on Saturday, August 25, 2021 at 2PM in the funeral home chapel. Interment will follow at Green Lawn Cemetery. The family will receive friends on Friday from 5PM to 8PM at Northside Chapel Funeral Directors. Shortly after he passed, we were able to spend time with dad in the very room where he left to enter his heavenly rest. He looked peaceful which gave us great comfort. The hospital chaplain then came to the room to offer words of encouragement and prayer. But before offering any wisdom, she wanted to know more about him. For several minutes we shared stories about how proud he was of his Air Force service and how that experience helped him build his character. We spoke of his incredible career at AT&T and how he made a significant impact on a prestigious company. We talked about his service to the Masonic Lodge and the Shriners and how much he gave back to the community. But what really defined him was his love for his family. After his retirement, his world became his grandchildren which started with one and grew to four beautiful granddaughters and two amazing great granddaughters. He loved picking flowers from his yard with them, sharing his sticks of gum, and holding them in his lap for hours. We've never seen anyone light up as much as when his "girls" came to see him. But to his sons, we knew him as a man with endless energy to provide for his wife of 65 years and give her the best life possible. Planning for her well being even when he knew he may not live as long as she does. We saw a man who prepared us to love our families and to always give our best to them. We saw deep appreciation in his eyes and tender love in his hugs. When he said "I love you", there was no doubt he would give his last breath for us. His extended family and friends knew he would do anything for them as well. Even on the day we write this tribute, one of his dear friends spoke of him as a brother. When we finished our story, the chaplain was amazed at the greatness of this man and the closeness of our family. She then prayed for us and gave us a sweet blessing. In that moment, while we will still miss him terribly, the sadness began to turn to celebration of the man we called husband, dad, papa, great-papa, uncle, brother, and friend. We wish he could have been here longer but his 91 years on this earth has filled our hearts to the brim. By Terry Waldrop & Paul Waldrop

The family of Mr. George T. Waldrop created this Life Tributes page to make it easy to share your memories.

George Thomas Waldrop age 91 of Marietta passed away on September...

Send flowers to the Waldrop family.