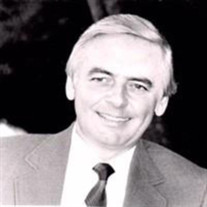 Gerald L. Van De Velde “Jerry”, of Roswell, GA died peacefully Friday, February 4, 2022, from Congestive Heart Failure. He was born June 5, 1938, in Detroit, MI, son of the late Marcel and Marcella (Gudenau) Van De Velde. Jerry is survived by his loving wife of 62 years, Faye; their 3 children: Lori(Tim) Nolan of Roswell, GA, Scott(Joanne) Van De Velde of Cumming, GA, Sheri(Jim) Barletta of Woodstock, GA.; ten grandchildren: Emilie(Jonathan)Clary, Nicholas(Elizabeth) Nolan, Chadd Nolan, Andrew Nolan, Chelsea(Nicholas) Price, Sydney Van De Velde, Cameron Van De Velde, Michael Barletta, Matthew(Samantha)Barletta, and Nicole Barletta; great grandchildren Theo and Beckett Nolan, Jackson and Andrew Price, Charlee and soon to be baby Clary; Siblings Patricia(Patrick)Tignanelli and James(Lila) Van De Velde and many nieces and nephews. Besides his parents, he was preceded in death by his brother, A. Richard Van De Velde. Jerry graduated from Denby High School, Detroit, MI in 1956. He married his high school sweetheart, Helen “Faye” Brown on June 11, 1960, and the birth of their 3 kids soon followed. Their marriage set the bar high and is an inspiration for all who knows them. Jerry always had a passion for cars and pursued careers/hobbies accordingly. Upon high school graduation, he purchased a gas station with his soon to be brother-in-law Pat. From there, he continued working on cars and landed a career at Ziebart Rustproofing in Detroit. After several years at Ziebart Corporate, traveling the world training personnel, he purchased his own Ziebart franchise and moved his family to Toledo, OH in 1972. Jerry turned this franchise into a successful venture, sold it and retired at the young age of 39. But his retirement did not slow him down. He dabbled in various businesses with friends throughout the years. He also was handy with any tool, any electrical job or home improvement project. If anyone needed a repair or business advise they would call Jerry. He spent his time renovating rental properties, remodeling their home or helping his grown kids or family friends with their home improvement projects. He loved collecting sports cars – mostly Mustang Convertibles and Corvairs but his pride and joy was his 1969 Pontiac GTO Convertible. And, back before man-caves were popular Jerry loved collecting pinball machines, juke boxes and electronic video games for his basement, and collecting and rebuilding antique light fixtures. In recent years, his biggest hobby was card playing. He enjoyed playing cards 2-3 times a week with his famous saying “happy to take your money if you want to play”. And, of course, on most days, he was the big winner. His favorite things were his beloved Faye, God, his kids and grands, playing cards, his whiskey, cars, money, and his dog Bo......not necessarily in that order! He wasn’t overly emotional or would say words of affirmation often but in recent years he would tear up talking about his family – many times with a sense of humor. His typical words of affection to his Faye was “you look pretty good for an old broad”. He even said that to her in his final days in the hospital. Or, if anyone asked him how he is doing, his response was always- “Not bad for an old guy”. For all who knew Jerry, he lit up a room with his warm and welcoming demeanor – always ready to host a party and to offer anyone a cocktail. He loved giving tours of his lamp room, inviting those who toured to take a lamp home with them. To his family, he was the Greatest Man they have ever known. And, if you were lucky enough to know him, you might think the same. There is a Special place in heaven for you, Jerry - your buddies Jim(Lipshit), John and Benny have been holding your seat for you - they finally have their foursome for euchre - with friends Denny and Carl looking on playing bartenders. To honor his final wishes, Jerry has chosen cremation with a private service at Northside Chapel-Roswell, GA. In lieu of flowers, memorial donations can be made to the Alzheimer's Association or to the American Heart Association. And since Jerry loved parties, A Celebration of Life Party is being planned in the Spring 2022 for all to attend. Date and place TBD.

The family of Mr. Gerald L. Van De Velde created this Life Tributes page to make it easy to share your memories.