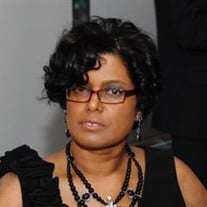 On the afternoon of May 27, 2018, Gina Patrice Poitier Gouraige was granted her angel wings. Her departure was quick and unexpected. Gina was the youngest daughter of Sidney and Juanita Poitier. Gina spent her first 7 years in Pleasantville, New York, and then moved with her family to Stuyvesant, New York. As the youngest of 4 children Gina was teased quite a bit by her oldest sister Beverly. She was protected and soother by her next older sister Pamela and her sister Sherri practiced her hair cutting skills on Gina often. As the youngest child Gina, was loved tremendously, spoiled by her mother and her second Mother "Mama Jean". Gina spent many a day on her father's lap escaping the strict discipline her expected from her sisters. While still in high school, Gina met the love of her life and soul mate, Gaetan Gouraige. After graduating from high school, Gina attended, Rutgers University, and later transferred to the State University of New York in Albany, (closer to the aforementioned love of her life), Gina graduated with a degree in Fine Arts. However, Gina's real passion was fashion design. She moved to Atlanta, Georgia to study at the American College of Applied Arts, earning a degree in Fashion Merchandise, Gina and her business partner, opened a designer boutique, Bejai Designs, which specialized in fashion for large sized women. Gina converted to Catholicism and on June 30th 1988, Gina and Gaetan were married in Atlanta, Georgia. Gina was a dedicated and active member of Saint Peter Chanel. Gina and Gaetan's union was blessed with 4 beautiful children. The youngest Emmanuel, preceded Gina in death. Gina's heart knew no bounds, she loved her family and friends with a fierceness that went above and beyond normal expectations. She gave of her time and treasures with such love and dedication. From the church ministries, to making sure her children always had what they needed, to picking up the day old bread for Must ministries. In addition she was the rock on which her mothers Juanita and Mama Jean depended. She was so detailed in her questions when she took them to their doctor appointments; the doctors though she was also a doctor. It is a gross understatement to say that she will be missed. Left to mourn her and celebrate her bright light are Gina's husband, Gaetan Gouraige, daughters Guylaine Marie-Rose Gouraige, Gabrielle Marie-Therese Gouraige and son Etienne Poitier Gouraige. Parents, Juanita Poitier, Sidney Poitier, Francis Jean Walker, and Joanna Poitier. Sisters Beverly Poitier-Henderson, (Frank), Pamela Poitier, Sherri Poitier, Anika Poitier, (Leandro), Sydney Poitier-Heartsong, (Dorian). God-Sister Connie Wilson, (Winston). Brother-in-laws Ghislain Gouraige, (Marjorie), Guy Gouraige. Sister-in-law Chantal Humphrey, (Michael). Nieces, Aisha LaBarrie, (Darryl), Gaelle & Chloe Gouraige, Emma Kyker, and Alexandra Humphrey, Paloma DiMonriva, Sunny Plum Heartsong, Keisha Henderson, (Cydric), Lore Gouraige. Nephews, Michael Jordan (Jacinta) Frank Henderson IV, Cedric Lewis, Remy & Gilles Humphrey, March Poitier-DiMonriva, Great-Nieces, Ayele, Kai, & Diarra LaBarrie, Seinna Jordan. And a host of cousins and friends. If there ever was a sweet angel, ready for heaven it was Gina. She has surely been greeted in heaven with the words "Well done my good and faithful servant, well done."

On the afternoon of May 27, 2018, Gina Patrice Poitier Gouraige was granted her angel wings. Her departure was quick and unexpected. Gina was the youngest daughter of Sidney and Juanita Poitier. Gina spent her first 7 years in Pleasantville,... View Obituary & Service Information

The family of Mrs. Gina Patrice Poitier Gouraige created this Life Tributes page to make it easy to share your memories.

Send flowers to the Gouraige family.