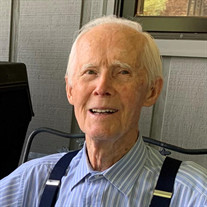 Glenn W. Wilkie, 99, of Alpharetta, Georgia, passed away Saturday, November 14, 2020, at his home. Glenn was born at home in Cherokee County, GA, on August 17, 1921 to George W. Wilkie and Rosetta Cape Wilkie. He graduated from Cherokee County High School and then entered the Army Air Corp in December 1942. He served as a high speed telegraph operator during World War II in the China-Burma-India Theater of Operations and was stationed on Tinian Island in support of B-29 Bombers. After serving in the military, he returned home and found work at the Cotton Mill in Canton, Georgia. He met Alice Katherine Cox in 1946, and they married on May 29, 1947. They were married for 72 years. They moved to Alpharetta in 1953 where they had purchased a grocery store and service station on Crabapple Road. They worked side-by-side in the store for 29 years. He enjoyed having a big garden and sharing his vegetables with family and friends. He also enjoyed working with wood and building furniture. Glenn is survived by his wife, Katherine, his daughter, Sharon Wilkie Bean and her husband Richard, his granddaughter, Teresa Bean Charles and her husband John, his two great-grandchildren, Jenna Katherine Charles and Owen Stuart Charles, and several nieces and nephews. He was preceded in death by his parents and his siblings. Visitation will be held on Monday, November 16, 2020 from 3Pm to 6PM at Northside Chapel. Due to COVID restrictions and the family’s request masks are required and social distancing is to be practiced during the visitation. In lieu of flowers, donations can be made to the Hightower Baptist Church Cemetery Fund, 3444 Hightower Road, Ball Ground, GA 30107. Northside Chapel Funeral Directors, Roswell,770-645-1414. www.northsidechapel.com

The family of Mr. Glenn W. Wilkie created this Life Tributes page to make it easy to share your memories.

Send flowers to the Wilkie family.