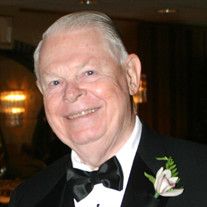 Henry A. “HANK” Lavery, Jr., 89 of Roswell, Georgia and formerly of Upper Montclair, NJ passed away peacefully after a short illness. He was born on 10/16/1932 in Elizabeth, NJ and spent much of his youth in Philadelphia and Elizabeth with his large clan of aunts, uncles and cousins playing cards. He graduated from Xavier High School in NY and attended Villanova University and Florida Southern University receiving a degree in Mathematics. He was a proud veteran serving in the Airforce as a KC-97 pilot, refueling airborne planes over Greenland. He also participated in the SAGE (Semi-Automatic Ground Environment) program, serving as one of many moderators for the nation’s first air defense system. Hank had a successful career as a pioneer in the transportation industry and was instrumental in the design and implementation of systems that allow data to be electronically exchanged between companies using standard formats. He joined TranSettlements, Inc., in 1979 bringing an innovative freight settlement system to the marketplace. He provided the creative, technical and managerial direction to develop one of the first EDI translators. He led the development of an EDI Network which allows shippers and carriers to interact electronically. Hank served the EDI community in various leadership positions over the years focusing on the transportation and logistics industries. For his efforts, he was awarded numerous awards including the Edward A. Guilbert Lifetime Achievement Award. Hank was a devout Catholic. He was a parishioner at St Peter Chanel Catholic Church in Roswell and served on the St. Vincent DePaul finance committee for a number of years. Prior to his military service he spent some time in the Seminary until meeting Edna (Faber) Lavery, his favorite dance partner. Together they had eight children and Hank said before he left us that when he reflected on his life and what he was leaving behind, he saw eight great kids and their spouses who are successful, loving and kind people and 14 grandchildren who are raised by those loving, kind people. He feels that has allowed him to leave the world a better place. He is pre-deceased by his wife, Edna Lavery of 62 years, his parents, Henry and Agnes (Houldsworth) Lavery and brother, Jack Lavery. He is survived by his eight children Bob (Lori), Mary, Kevin, David (Marybeth), Michael, John (Karen), Claire (John) and Paul (Nico); 12 grandchildren and two great grandchildren, his sister and brother-in-law, Agnes and Bob Kelber, dear friend Margie, numerous nieces and nephews and great friends. Funeral arrangements are pending at this time as we await a military burial. In lieu of flowers, please consider making a donation to St Jude Children’s Hospital or your local St. Vincent DePaul Society.

Henry A. &#8220;HANK&#8221; Lavery, Jr., 89 of Roswell, Georgia and formerly of Upper Montclair, NJ passed away peacefully after a short illness. He was born on 10/16/1932 in Elizabeth, NJ and spent much of his youth in Philadelphia and Elizabeth... View Obituary & Service Information

The family of Mr. Henry Lavery created this Life Tributes page to make it easy to share your memories.

Send flowers to the Lavery family.