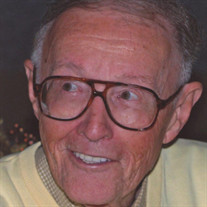 Howard A Hoffer, Jr., Entrepreneur and Salesman, passed away Saturday evening, March 12th, 2022 in Woodstock, GA. Howard, commonly referred to as Mr. H, was born August 22, 1924 in Merion, PA to Howard Anthony Hoffer, Sr. and Mary L. Mac Neil. He had a brother named Norman. He enjoyed all kinds of sports while in High School and being on the chess team. He then went on to college at the University of Pennsylvania, Wharton School. While in college, World War II broke out, and he enlisted in the Army. While in the Army he met his true love, Ruth Louise Harper, of Fort Smith, AK. Ruth and Howard were married in 1946. Their marriage lasted for 63 years. They had three children, Deborah, Greg, and Kim. Mr. H, being the entrepreneur that he was, had 1500 acres in Nova Scotia, Canada in 1953. He sold Christmas trees throughout the United States, then went to work for General Electric Company for 25 years. Then he came to Atlanta, GA and owned Cain Lighting and Supply for 10 years, then owned Hoffer Construction building houses for two years. His main accomplishment was starting Southeastern Appliances and Lighting. He was president for 20 years with many great friends and employees until he retired. He is survived by his daughter, Deborah Pals, and his son, Greg Hoffer; eight grandchildren; and nine great grandchildren. He lived 97 wonderful years. He will be missed by many.

The family of Mr. Howard Anthony Hoffer Jr. created this Life Tributes page to make it easy to share your memories.

Howard A Hoffer, Jr., Entrepreneur and Salesman, passed away...

Send flowers to the Hoffer family.