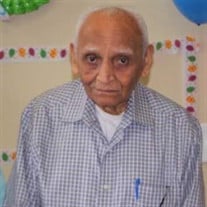 Our beloved Kaka, Shri Indravadan Tribhovandas Shah, passed away peacefully on Tuesday, March 1st, 2022 and started his heavenly journey on the auspicious day of Mahashivratri. During his 92 years on Earth, Kaka lived a life of perseverance, humility, and integrity. Born on June 5th, 1929 in Jambusar, Gujarat to Swargiya Shri Tribhovandas Shah and Swargiya Shrimati Maniben Shah, Kaka was the youngest of 6 children. After their parents passed away, Kaka and his elder brother, Swargiya Shri Sunderbhai Shah, moved to Mumbai in search of better opportunities. After arriving in Mumbai, the brothers set up an engineering business called Hasmukh Engineering Works, while Kaka completed his education. Over the years, the business experienced notable achievements, including a visit from then Prime Minister of India, Mr. Lal Bahadur Shastri. On 16th February, 1959, he married his wife Swargiya Shrimati Chandrikaben Nagori, and they had three children - Heena, Darshana, and Jayesh. In spite of humble means, Kaka left no stones unturned to educate his children and turn them into successful professionals, while instilling upon them the importance of good deeds and prayers. In 1996, he immigrated to America to support his children and help raise his grandchildren. He took it upon himself to teach his grandchildren to have good values as well as speak Gujarati. One of his proudest moments was when he became a naturalized citizen of the United States of America on December 10th 2009. He was a die hard cricket fan and loved supporting India’s cricket team on TV. He loved to go on walks and stay active. He was an inspiration for good health and healthy well-being. When not watching cricket or going on walks, he could be found playing cards with his grandchildren or reading the newspaper. Kaka was loved by his community and made it his life’s mission to put the needs of others above his own. He would spend his free time volunteering at the temple and caring for those that were less fortunate than he was. His compassion, altruism, and generosity is an inspiration to others. Kaka was also a pious devotee of Shri Rang Avadhoot Maharaj and often sung Dutt Bavani with his family. Kaka’s memories will always be treasured by his children, sons-in-law Jayeshkumar and Rajesh, daughter-in-law Deepika, grandchildren Milap, Sagar, Karan, and Kajol, and grand-daughter-in-law Unnati. Although he is no longer with us physically, his memory, teachings, and blessings will forever remain in our hearts.

Our beloved Kaka, Shri Indravadan Tribhovandas Shah, passed away peacefully on Tuesday, March 1st, 2022 and started his heavenly journey on the auspicious day of Mahashivratri. During his 92 years on Earth, Kaka lived a life of perseverance,... View Obituary & Service Information

The family of Mr. Indravadan Tribhovandas Shah created this Life Tributes page to make it easy to share your memories.

Send flowers to the Shah family.