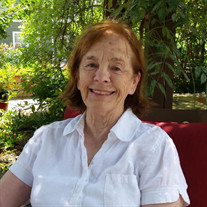 Jacqueline (née Harris) Burke (Jackie), 83 years old, of , NC and Buffalo, NY, passed away peacefully, surrounded by her children, on Friday, July 10 in Alpharetta, GA. She was preceded in death by her husband of 59 years, John Patrick Burke (Jack). She is survived by her children: John Harris Burke (Tamara Davis), Catharine Emma Bagdonis (Anthony), Patricia Lorence (Kent), and Elizabeth Burke; and grandchildren: Joshua Maxwell Burke, Eammon James Burke, Ava Marie Lorence, and Audrey Olivia Lorence. Raised in Farsley, England, Jackie was a competitive athlete at Pudsey School, playing rugby on a boys’ team, later focusing on gymnastics and field hockey, and then tennis as an adult. Upon completing her education, Jackie worked in banking in London where she met her husband Jack, a Lieutenant JG in the United States Navy. After corresponding for three years, she moved to the United States and they married in 1959. Jackie proudly became a United States citizen in 1997. Jackie was an avid reader and supporter of her local libraries, gardener, birdwatcher, and all-around animal lover, always taking in strays and giving them a caring home. She was a patron of the arts, a theater enthusiast, and traveled throughout the United States and abroad with her husband Jack. Jackie participated in many local organizations including the “Red Hat Society,” numerous book clubs, bridge clubs, and was an active member of her church. She was also a Buffalo Bills fan and booster. She loved dining out and enjoyed dessert with every meal. Jackie will be remembered by her friends and family for her keen sense of humor and her infectious laughter. Those wishing to honor Jackie’s memory may make donations to an organization that she held close to her heart: Atlanta Humane Society Mansell Campus.

Jacqueline (née Harris) Burke (Jackie), 83 years old, of , NC and Buffalo, NY, passed away peacefully, surrounded by her children, on Friday, July 10 in Alpharetta, GA. She was preceded in death by her husband of 59 years, John Patrick Burke... View Obituary & Service Information

The family of Mrs. Jacqueline Harris Burke created this Life Tributes page to make it easy to share your memories.

Send flowers to the Burke family.