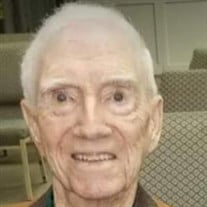 Mr. James Donald Clark, of Alpharetta, Georgia, departed this life for his heavenly home at the age of 88 years on March 15, 2022, following an extended illness. Mr. Clark was born in Atlanta, Georgia, on October 14, 1933, to Ethel Weems Clark and Lewis Britt Clark. He was a veteran of the United States Army, having served two years in Germany from 1954-1956. He was a retiree from the City of Atlanta, where he worked for 30 years. Mr. Clark is predeceased by six older brothers (Guice, Marshall Cecil, Jewell, Walter and Terrell Eugene), as well his beloved wife of 69 years, Shirley Jean Clark, who passed away in February 2021. He is survived by his older brother, Earl Dean Clark (Edith), his younger sister, Regina Dobbs, and many nieces, nephews, and their children and grandchildren. Also surviving are his three children, Karen Bennett (David), Linda Cooper, and Grady Clark (Jennifer); seven grandchildren, Greg Clark, David Phillips, Eric Phillips (Katrina), Alan Clark (Sarah), Melody Beetley (Nick), James Clark and Chris Clark; great-grandchildren, Daniel and Jacqueline Beetley, Eloise and Nora Clark, and Zion, Rebekah and Audrey Phillips. Daddy will be remembered for his love of the Lord, his larger-than-life personality, his sense of humor, his love of music and entertaining, his beautiful voice, and his love of the people he met in all walks of life. He will be greatly missed by all who knew him. A visitation will be held on Monday, March 21st, from 1:00 p.m. to 2:30 p.m., with a service immediately following at Northside Chapel Funeral Directors, 12050 Crabapple Road, Roswell, GA 30075. Interment will follow the funeral service (4:00 p.m.) at Greenlawn Cemetery, 10993 Alpharetta Hwy., Roswell, GA 30076. A reception will be held following the interment at Roswell Funeral Home. In lieu of flowers, donations can be made in James Clark’s memory to: Calvary Chapel River Oaks, Attn: Benevolence Fund, 232 Nelson Street, Cartersville, GA 30120.

Mr. James Donald Clark, of Alpharetta, Georgia, departed this life for his heavenly home at the age of 88 years on March 15, 2022, following an extended illness. Mr. Clark was born in Atlanta, Georgia, on October 14, 1933, to Ethel Weems Clark... View Obituary & Service Information

The family of Mr. James Donald Clark created this Life Tributes page to make it easy to share your memories.

Send flowers to the Clark family.