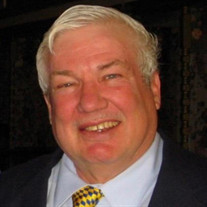 James (Jim) Gerald Ward was born on July 2, 1949 in Akron, Ohio. At age six months, his parents, Jerry and Sarah, packed their worldly belongings into a tiny house trailer and moved their young family to Memphis, Tennessee. Five weeks later they purchased seven wooded acres northeast of Memphis, parked their trailer there and camped in it for four years while building their first home from scratch. Jim thrived in that rustic setting, commandeering a tiny wheelbarrow to help his dad with the construction and exploring the acreage in his trusty cowboy boots with a cowboy hat covering his curly blond hair. Jim was a brilliant child whose mother taught him to read in desperation when he came down with measles and her voice grew hoarse from reading him so many stories on demand. He was a gifted speaker from a young age and was asked to emcee the high school graduation when only a fourth grader. After the family moved to Naperville, Illinois, in 1959, he became valedictorian of his eighth-grade class and co-authored an advice column for the Naperville Sun called “Tadpoles Speak Out” with a neighborhood friend. At Naperville Central High School, he continued to shine as a long-distance runner on the cross-country team. He was elected to the student council and served as treasurer of his class junior year. A graduate of the University of Illinois with a B.S. in Finance, he worked as a stockbroker for Kidder Peabody in Milwaukee and later became an ironworker, balancing on thin beams at great heights to help build the famous McDonald’s headquarters in Oak Brook. After moving to Roswell, Georgia, he established his own moving business and bought a lovely home in a pine woods overlooking a creek. He joined a church and became an officer in a non-profit organization that helped the needy. Jim was passionate about music and also loved hiking in the woods to observe deer and other wildlife. He had many fond memories of hunting and fishing with his friend Mark Grimmelbein at his family cabin in Minnesota. Jim made many friends throughout his life and often helped them out both financially and with his moral support. He is predeceased by his loving parents, Gerald (Jerry) Ward and Sarah Jane Ward, and is survived by his sisters, Linda (Thomas) Egenes of Fairfield, Iowa, and Cathy (Rich Salaiz) Ward of Oakland, CA; two nieces, Carina Salaiz and Liana Salaiz; three aunts, Diane Deinzer, Arlene Ward and Noreen Ward; numerous cousins; and his best friend, James Patrick Moore. The family will hold a celebration of life memorial in the coming weeks. In lieu of flowers, the family has asked that you donate to your favorite charity in Jim’s name.

The family of Mr. James "Jim" Gerald Ward created this Life Tributes page to make it easy to share your memories.

Send flowers to the Ward family.