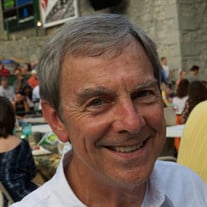 James Martin (Jim) Reinoehl December 24, 1946 to December 28, 2021 James Martin Reinoehl passed away on December 28, 2021 following a two-year battle against cancer. He was born on Christmas Eve in Philadelphia, Pennsylvania to the late Brodwell and Elaine Reinoehl. After living in several cities, his family moved to Stone Mountain, Georgia in 1960. Jim graduated from Clarkston High School in 1964, where he was honored as a STAR Student and a National Merit Scholar. Following high school, he attended Davidson College. He received his degree in Mathematics, was a member of Sigma Phi Epsilon, and established incredible lifelong friendships. Jim received a Master’s degree in Information Science from Georgia Tech in 1970 before serving four years in the United States Army. Jim began his professional career with Kurt Salmon Associates in Atlanta before moving to El Paso, Texas. Upon returning to the Atlanta area in 1977, he started JMR Software, a consulting company he ran for nearly 45 years, serving clients throughout the country with his tenacious approach to solving complex technical problems. His relationship with his clients far exceeded a typical business transaction, as he helped them not only solve their information technology issues but also offered sage advice as a consultant with their specific business needs. His clients inevitably became his friends. Jim is survived by his beloved wife, Louise, his son John and wife Kim, and his daughter Jenny Purtill and husband Allan. Being a devoted husband and father was a role he cherished, and he loved his wife and children with his whole heart. He prioritized his family above all else. He is also Pop to two adored grandchildren, Syler and James Purtill. Jim’s sister, Elizabeth Causey, predeceased him earlier this year. He is also survived by her family, Harry Causey, David and Joanne Causey, and Debbie and Art Hays. Jim loved the Lord with all his heart, and used his gifts to serve at North Point Community Church, where he had been a member since its founding in 1995. He was captain of a parking team and led a variety of small groups with Louise in their home always with a servant’s heart focused on reflecting Christ. Jim was incredibly generous to family, friends, neighbors and strangers and loved finding creative ways to help fill a need wherever he saw one. In all areas of his life, Jim embodied his life verse from Ecclesiastes 9:10—Whatever your hand finds to do, do it with all your heart (NIV). Jim also leaves behind a host of friends from all areas of his life, including high school, Davidson, church, and business. Many relied on his good counsel when wrestling with difficult decisions. His sense of humor was well-known, and he loved to be the life of the party. His family is deeply grateful for all of the love and support we have received the last few weeks and months. A memorial service will be held on Thursday, January 6, 2022 at 10:00 am EST at North Point Community Church (4350 North Point Parkway, Alpharetta). The service will be shown via livestream https://northpoint.org/reinoehl-memorial. In lieu of flowers, please consider a donation to Atlanta Care Center (www.atlantacare.com) or Eagle Ranch (www.eagleranch.org), two organizations near to Jim’s heart.

The family of Mr. James Martin Reinoehl created this Life Tributes page to make it easy to share your memories.

Send flowers to the Reinoehl family.