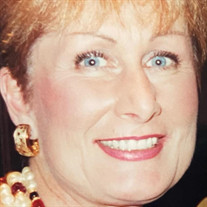 Jeanne Vivian Murphy (nee Heffernan), 82, Roswell, GA, passed away on November 25, 2020. Jeanne was born September 22, 1938 in Chicago, IL to John and Marie Heffernan. She graduated from the Ursuline School (New Rochelle, NY) in 1956 and from Marymount College (Arlington, VA) in 1958. Jeanne married her husband, Peter Murphy, on February 13, 1960, and they raised five children together. Nothing provided her with greater joy and pride than her family, who will miss her dearly. Jeanne’s fondest memories of her childhood are the many summers spent at her beloved Camp Tawisi in Harrison, ME. As a young bride and mother, Jeanne had a knack for creating a home for her family despite moving twelve times. Her talent in this area peaked in 1984 when she began her year in Marietta, GA, hosted her always in demand Thanksgiving dinner in Milwaukee, WI, and three weeks later seamlessly welcomed extended family to a perfectly festive Christmas celebration in Westport, CT. Jeanne never missed a beat as the consummate hostess and truly embodied the notion that home was wherever her family was. She was preceded in death by her husband of 58 years, and is survived by her five children: Patricia McIntyre (Roswell, GA), Rosemary Murphy (Milton, GA), Brendan Murphy (Charleston, SC), Peter Murphy (Tracy) (Glen Allen, VA), and MaryBeth Parker (Stephen) (Princeton, NJ); seven grandchildren: Caitlin, Liam, Patrick, Bridget, Paige, Kyra and Dominic; her sister Aurelie Druckenmiller (Gary) (St Simon’s, GA), her brother John Heffernan (Deborah) (Bridgton, ME), and twenty-five nieces and nephews who share loving memories of her. Due to the ongoing threat to community health posed by CoVid, no services have been planned at this time.

Jeanne Vivian Murphy (nee Heffernan), 82, Roswell, GA, passed away on November 25, 2020. Jeanne was born September 22, 1938 in Chicago, IL to John and Marie Heffernan. She graduated from the Ursuline School (New Rochelle, NY) in 1956 and from... View Obituary & Service Information

The family of Mrs. Jeanne Murphy created this Life Tributes page to make it easy to share your memories.

Send flowers to the Murphy family.