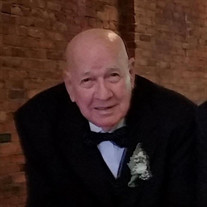 Joel Edward Cochran, Sr. age 90, of Milton, Georgia, passed away on Thursday, December 2, 2021. He was born in Old Milton County, Georgia, in the community of Birmingham on January 29, 1931, to Cora Elizabeth Castleberry and William Alonzo Cochran. Joel was the youngest of twelve children. At 19, he joined the Navy and was stationed in San Diego. He was assigned to the ship U.S. Noble APA 218 and fought in the Korean War. Joel placed his faith in Christ in 1943 and was baptized in Sam Darby’s lake. His favorite verse was Hebrews 11:1; Now faith is the substance of things hoped for, the evidence of things not seen. His faith became sight when he joined Jesus, his parents, and his siblings at the time of his death. He was active in church, serving as a Sunday School teacher for different age groups throughout his life. He was an active member at First Baptist Church Woodstock. Joel retired from General Motors in 1986, and he and his wife Peggy enjoyed traveling and spending time with family during retirement. Joel will be missed by all who knew him, but most of all by his wife - Peggy Phillips Cochran, the love of his life, his children, grandchildren, and great-grandchildren. He is survived by his wife Peggy Cochran, his son and daughter in law, Joey and Karen Cochran, son Phil Cochran and daughter and son-in-law Jana (Cochran) and Adam Biesecker. 5 grandchildren; Kelly Walker, Brett Cochran, Zachary Biesecker, Corrie Biesecker Riggs, and Benjamin Biesecker 5 great-grandchildren, Gracie Walker, MaKayla Cochran, Mason Cochran, Everly Riggs, and August Riggs. A celebration of life service will be conducted Saturday, December 11, 2021, at 2:30 pm from Northside Chapel Funeral Directors and Crematory in Roswell (12050 Crabapple Rd, Roswell, GA 30075). Visitation will be Friday, December 10, 5:00 - 7:00 pm and one hour before the service on Saturday. A private family graveside service will be held on December 29, 2021, at 2:00 pm at Georgia National Cemetery with military honors. In lieu of flowers, donations may be made to Church on the Street, First Baptist Church Woodstock. https://firstbaptistwoodstock.givingfuel.com/kingdom-giving Fund: Church on the Street

Joel Edward Cochran, Sr. age 90, of Milton, Georgia, passed away on Thursday, December 2, 2021. He was born in Old Milton County, Georgia, in the community of Birmingham on January 29, 1931, to Cora Elizabeth Castleberry and William Alonzo... View Obituary & Service Information

The family of Mr. Joel E. Cochran Sr. created this Life Tributes page to make it easy to share your memories.

Send flowers to the Cochran family.