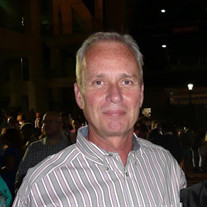 John R. Branagan, of Roswell, GA, died peacefully on Sunday, January 16, 2022, aged 63 years. He was born in Pittsburgh, PA, son of the late Helen W. and John E. Branagan, and spent his younger years growing up and living in South Texas before moving to Atlanta in 1991. John is survived by his wife of 31 years, Laureen A. Branagan; sister Karen Nanos and brother-in-law Dr. Jeffrey Nanos, and their son Jason Nanos; brother Master Sgt. Chris Branagan, US Army; and numerous beloved nieces and nephews. John graduated from John Jay High School in San Antonio, TX. Following several years of work in the cable industry, John combined his skills as a mechanic with his passion for flight and enrolled in an aviation mechanics program at the Hallmark Institute in San Antonio. After graduating at the top of his class, John accepted a position at Delta Airlines, where he worked as an Aircraft Maintenance Technician until his retirement in 2021. His work at Delta encompassed troubleshooting and problem solving on some of the most complicated avionics, electronics, mechanical, and flight control systems on everything from regional jets to Boeing 747s. Besides his love of airplanes, John was an avid motorcyclist, and could often be found touring the winding roads of Georgia with his wife Laureen, and friends from Delta. John’s consummate professionalism at Delta transferred to his home, where he was meticulous in maintaining all of his cars and motorcycles, including his beloved 1979 Husqvarna 390 that he owned for over 40 years. John and Laureen loved traveling together, from visiting John’s relatives in Edinburgh, Scotland, to vacations in Virgin Gorda, their favorite island in the Caribbean. While living in Roswell, their garden was the envy of the neighborhood, and they frequently shared its bounty with their wonderful neighbors. A memorial service service will be held Wednesday, February 9 at 3pm, at Northside Chapel in Roswell, GA. In lieu of flowers, the family would appreciate donations to their favorite charity, St. Jude’s Children's Hospital (www.stjude.org/donate). A memorial service for John’s friends and family in Texas will be held in San Antonio at a later date to be decided.

John R. Branagan, of Roswell, GA, died peacefully on Sunday, January 16, 2022, aged 63 years. He was born in Pittsburgh, PA, son of the late Helen W. and John E. Branagan, and spent his younger years growing up and living in South Texas before... View Obituary & Service Information

The family of Mr. John Roderick Branagan created this Life Tributes page to make it easy to share your memories.

Send flowers to the Branagan family.