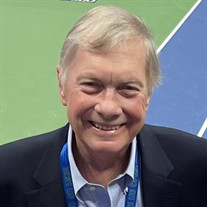 John Houston Callen was born January 11th, 1953 to Ann Blackburn Callen and George Marion Callen, Jr. in Birmingham, AL. Thus began John’s journey into excelling in everything he did in life… from Student Body President, Athletic Club President, National Honor Society, and varsity tennis player at Ramsey High School to winning a full tennis scholarship to Georgia Tech. His greatest accomplishment while at Tech, though, was meeting his future wife on a blind date! After graduating from Georgia Tech, John made his mark as head tennis pro at Indian Hills Country Club, Big Canoe and eventually Athletic Director at Standard Club—teaching thousands to play and love the game of tennis. While he was building the foundation for his lifelong tennis career, he was building the foundation for a brand new family life with his marriage to Frances in 1976 and then the arrival of their three little daughters—Ashley in 1980, Melanie in 1981, and Courtney in 1983. As understated and calm as John always was—his face lit up with unsurpassed joy when those tiny fingers reached for his own. And he never let go as he guided them with Frances through childhood, college and beyond to the incredible women they are today—always listening with respect and careful attention to the individuals they are. His love for them fueled his drive and devotion to everything he accomplished. And accomplish he did! Thirty three years ago John became the USTA Southern Executive Director and COO where he made groundbreaking strides, eventually becoming the “face of tennis in the South” according to USTA President Mike McNulty. John’s accomplishments were legend and way too many to address here—but among them was the honor of being inducted into four Tennis Halls of Fame. John was a gentle, quiet giant of a man and meant the world to all who knew him. “John became your friend the instant that you met him,” said former USTA Southern President Bonnie Vandegrift. His innate compassion and enthusiasm drew people to him like a magnet. How he managed a larger-than-life presence with his always calm, always soft-spoken, always humble demeanor is a mystery. There will never be another like you. John adored spending time at their mountain home at Big Canoe. It’s been not only a haven for he and Frances, but the gathering place for all of the family—where memories were made to last a lifetime. Barbecues with John manning the grill, lots of wine glasses raised, hikes in the woods, movies watched, 4th of July fireworks and the grandchildren’s favorite—marshmallows in the fireplace with Papa J! Who can forget his granddaughter Aubrey’s face when he taught her to water the flowers on the deck? (We’re not sure if the look of pride in her eyes came from her or him.)…or the look on granddaughter Liv’s face when she saw snow for the first time on Christmas Eve? Then there’s grandson Quincy’s first “tennis” lesson at age three. Yes, they used a racquet—but bees took the place of balls. Swatting bees serves two purposes—always an advantage for John. It’s never too soon to work on that forehand or backhand and if you can keep those bees away at the same time—a WIN! Big Canoe was (and is) a place to just be together. Exactly what John wanted…and what will live on. John lost his battle with cancer on April 3rd, 2022 with his precious family by his side. Frances, Ashley and Courtney never left his side from the moment he came home from the hospital—taking incredible and truly awe-inspiring care of him until his last breath. Melanie will continue her greeting to her dad of “Hi, Handsome Man” every time she thinks of him and will be listening for the whisper of his response, “Hi Beautiful” from heaven. John, will be forever loved and incredibly missed. He will continue to inspire us by the way he lived his life. John is predeceased by his mother, father and sisters-in-law Claire Bindewald Crowe and Elizabeth Bindewald. Surviving are: John’s loving wife of 46 years, Frances Bindewald Callen; daughters, Ashley Callen Kissinger (Jamie) of Athens, Courtney Callen Huskey (Brian) of Marietta and Melanie Callen of Roswell; three adored grandchildren, Aubrey London Kissinger, Liv Bijou Kissinger and Quincy Beckett Huskey; John’s only brother, George Marion Callen III (Teresa) of Warrior, AL; sisters-in-law, Tito Kalb (Hank,) Helen Neiner (Joey,) Katherine Bever (Michaell,) MayMay Bickes (Tommy,) Jackie Huffman (Tim,) Michael Crowe (Joe-predeceased,) and two brothers-in-law, Bill (Lyn) and Tom (Betty) Bindewald; too many adored nieces and nephews to list. In lieu of flowers, the family requests that you consider a donation to the John Callen Scholarship Fund. https://southerntennisfoundation.com/johncallen/ A Celebration of Life Funeral Mass honoring John’s life will be held on Monday, April 25th, 2022 at 2:00PM at All Saints Catholic Church, 2443 Mt Vernon Rd, Dunwoody, GA 30338. The Celebration of John’s Life will continue with a Reception immediately following the Mass at Hyatt Regency Atlanta Perimeter At Villa Christina, 4000 Summit Blvd NE, Atlanta, GA 30319. And if you can’t join us, just look up at the stars tonight and think of them as holes to heaven, with John’s sweet smile peeking through to let us all know he’s okay. And if you ever hear thunder, don’t worry, it’s really just the reverberation of that wicked backhand of John’s… .

The family of Mr. John Houston Callen created this Life Tributes page to make it easy to share your memories.

Send flowers to the Callen family.