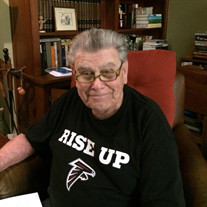 John Timothy Goss Jr, of Marietta, GA passed away peacefully May 15, 2021 due to complications from cancer and heart disease at the age of 82. A memorial service will be held at Roswell United Methodist Church on Thursday, May 20 at 11:00 am. Visitation will be hosted by the family at Roswell United Methodist Church in the Parlor at 10:00 am. Born in Louisville, Kentucky on June 16, 1938, he was the son of John T. Goss and Florence Miller Goss. John was raised along with his brother Jim and sister Sherree in Louisville. He was a graduate of Shawnee High School. He was known for his love of sports and his ability to roller skate at Fountain Ferry Park. John began his career with The Home Insurance company in Louisville. It was there on an elevator where he met his future wife Bettie Cheatham Goss. They were married December 27, 1962 and enjoyed 59 wonderful years together. John and Bettie welcomed their daughter Elizabeth into the world followed by their son John Robert. A transfer took the young family to Midlothian, Va a suburb of Richmond, VA where they made many lasting friendships. In 1979 John was promoted to Vice President of the Home Insurance Company and the family was transferred to Marietta, Ga where he opened their newest office. John retired from the insurance business in 2001. John served in the U.S army with one year of active duty and the remainder in the reserves. John was loved by his wife Bettie and devoted to his children Elizabeth and John along with his Christian Faith. John was a member of Roswell United Methodist Church where he was active in the CUC classes and served as membership chairman for 10 years. John never met a person he didn’t like, was quick to smile, and welcomed those that he knew or didn’t know as though lifelong friends. John lived life in the moment and made it a point to be involved in his children’s lives. He loved a rousing discussion on politics, watching the Braves, Falcons or Bulldogs or any sports game, and attending sporting events with his children. John especially loved his granddaughter Devon and being her Pop Pop. John is survived by his wife Bettie, daughter Elizabeth (Cary), son John R (Jill) and granddaughter Devon, sister Sherree Goss, and brother Jim (Julie) Goss. He is preceded in death by his mother Florence (Buck- stepfather), and father John Goss. The family requests donations be made to Roswell United Methodist Church in John’s honor.

John Timothy Goss Jr, of Marietta, GA passed away peacefully May 15, 2021 due to complications from cancer and heart disease at the age of 82. A memorial service will be held at Roswell United Methodist Church on Thursday, May 20 at 11:00 am.... View Obituary & Service Information

The family of Mr. John Timothy Goss created this Life Tributes page to make it easy to share your memories.