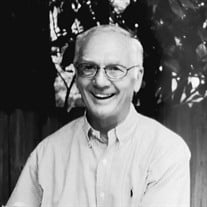 John Owen Smith of Liverpool, England passed away on Monday December 14th at the age of 85. After several weeks of failing health, he died peacefully in his home in Roswell, Georgia with his Beloved wife Joan, children (Miles and Samantha) and grandchildren (Trevor, Jarod, Grant, and Harrison) by his side. At 24, he met the love of his life, Joan. They lived together almost inseparable for over 60 years. As a young man, John played ice hockey for Liverpool and loved the competitive spirit of the sport. John and Joan made many tough choices in those days, including leaving England for America to work for Lockheed in 1967, living in Sandy Springs, Georgia with two young children. In 1970, John opened a foreign car repair shop – Chequered Flag - in Sandy Springs and began a 10-year journey car racing for SCCA. The first race car was a Mini Cooper that he brought over from England and then finished off his career in a Datsun B210 with several wins under his belt. In 1977, he opened another location with a body shop on Oak Street in Roswell, GA. The family then moved to Roswell where in time he also opened a foreign car parts store – Roswell Foreign Auto Parts - on Hwy 9. He retired in 1997 at the age of 62. With a passion for golf, he was a member of the Settindown Creek Golf Club in Roswell, GA. He spent no less than three days a week on the golf course after retirement and had a great group of gentlemen that he loved to play with and always had a bet on who the winner would be. John had ten hole-in-ones at the course he loved so much. He was a strong patriarch for his family and a good friend to all. An incredible father who always took care of his children by teaching and providing guidance. John was a loving grandfather who cherished weekends at their pool with the grandchildren and loved them dearly. Always a strong, proud, and great man, he will always be loved and missed by many! He is survived by his loving wife, Joan Wiggins Smith, two wonderful children, Miles Smith, and Samantha (Smith) Sorrells, and four exceptional grandsons, Trevor and Jarod Sorrells and Grant and Harrison Smith, his sister, Jean Batchelor, niece, Wendy Brock and Nephew, Russell Thomas. A Memorial Service will be held at Northside Chapel with details forthcoming on their website.

John Owen Smith of Liverpool, England passed away on Monday December 14th at the age of 85. After several weeks of failing health, he died peacefully in his home in Roswell, Georgia with his Beloved wife Joan, children (Miles and Samantha) and... View Obituary & Service Information

The family of Mr. John Owen Smith created this Life Tributes page to make it easy to share your memories.

Send flowers to the Smith family.