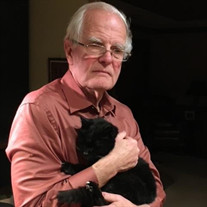 John A. Wackerman, age 73, from Alpharetta, GA, passed away on September 13, 2021, at Kennestone Hospital in Marietta, GA. John was born and grew up in Tonawanda, NY. He graduated from Kenmore East High School in 1966. While in high school, John obtained an internship at the GM foundry in Tonawanda, NY – a job that would determine the remainder of his work history. GM sponsored John’s college education at GMI (General Motors Institute, now Kettering University), in Flint, Michigan, where John was a member of the Theta Xi fraternity and obtained a degree in Mechanical Engineering. John worked for GM for 42 years before retiring from GM at the end of 2008, when the plant in Doraville, GA, closed. John transferred to the GM plant in Doraville, GA, in the mid-80’s, which necessitated a move from New York to Georgia. He landed in Johns Creek, GA. John served in the army reserves for six years, from 1971 until his honorable discharge in 1977. He received recognition for his expert Marksmanship with M-16 and GRENADE Qualification. After moving to Georgia, John faithfully attended Johns Creek United Methodist Church, where he was an usher and youth leader. In 2007, John moved from Johns Creek to Alpharetta and was a faithful member of Northbrook United Methodist Church in Roswell, GA, until his death. In GA, John enjoyed playing tennis, obtained an MBA from Mercer University, became an avid ballroom dancer, and continued his love of model railroading by joining a model railroading group, the Atlantic Coast S Gaugers, Georgia Division, and building a train layout in his basement. He was also active on his Alpharetta neighborhood’s HOA, serving on various committees in various capacities. John was a member of the Georgia Society of Professional Engineers (GSPE) and held several leadership positions. He was selected as the 2001-2002 Engineer of the Year. John is preceded in death by Barbara Duncan Klaiber (mother), Stanley G Klaiber (stepfather), Arnold Wackerman (father), and Bill Klaiber (stepbrother). He is survived by Janice Haynes (stepsister), Joy Boozer Wackerman (wife), Jessica Wackerman (daughter), Jeanine Wackerman Kennedy (daughter), Chris Kennedy (son-in-law), Kate Kennedy (granddaughter), Christina Kennedy (granddaughter), and Madison Kennedy (granddaughter). A memorial service for John will be held on Friday, September 24 @ 2pm at Northbrook United Methodist Church, 11225 Crabapple Road, Roswell, GA. In lieu of flowers, the family is asking for donations to one of the following organizations in his memory: Humane Society of NE Georgia https://humanesocietyofnortheastgeorgia.org/tribute-gifts/ Northbrook United Methodist Church https://onrealm.org/NorthbrookUMC/-/give/now Alzheimers Association https://act.alz.org/site/Donation2?df_id=32112&32112.donation=form1&utm_source=bing&utm_medium=paidsearch&utm_campaign=giving-bing&set.custom.wt=giving-bing&msclkid=0214274b014d13bfaccb460968e3578c

John A. Wackerman, age 73, from Alpharetta, GA, passed away on September 13, 2021, at Kennestone Hospital in Marietta, GA. John was born and grew up in Tonawanda, NY. He graduated from Kenmore East High School in 1966. While in high school,... View Obituary & Service Information

The family of Mr. John A Wackerman created this Life Tributes page to make it easy to share your memories.

Send flowers to the Wackerman family.