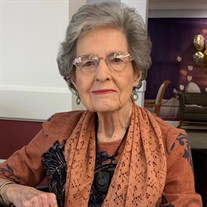 Kathryn Hesketh Samples (née Blackwood) of Roswell, GA, passed away on October 6, 2020, at 94. Born in Morgantown, MS, Kathryn lived throughout the southern United States and as far west as Texas. She ultimately moved to the Alpharetta/Roswell area in the early 1950s where she lived until her death. Kathryn was the youngest of three children of Arena and Robert Blackwood. Her father was a minister and the family moved many times during her formative years. She graduated college with a BA in Music from the University of Illinois and completed a Master’s Degree in Music Education from Peabody College which is now one of the colleges that comprise Vanderbilt University. Her teaching career began at a faith-based college in Tennessee before she moved with her daughter to Georgia. In the early 1950s, Kathryn taught band at the original Milton High School in Alpharetta. She later became the peripatetic band teacher for numerous elementary schools in North Fulton County that were feeder schools for Milton High School. In the mid-1970s, Kathryn moved into elementary school administration and became the first principal of Mountain Park Elementary School in Roswell. She retired from that position in the 1980s. Kathryn’s greatest passion was music. Even though she was a conformist, she stepped out of the mainstream and chose the trumpet as her instrument. In the 1940s there were few female trumpet players. She excelled and was recognized by local newspapers during her college years. On more than one occasion she stated that she was happiest when she was making music in an orchestra or band. Kathryn defined herself as an introvert, but she maintained a large cadre of friends of all ages throughout her life. She was a loving mother, grandmother and great grandmother and exhibited compassion, kindness and a loving spirit to all she met. She had the Puritan ethic that pushed her to make her bed every day and clean more thoroughly after the housekeeper finished. And she was a true Southern lady who still had coiffed hair, manicured nails, lovely attire and fresh lipstick. Kathryn is survived by her daughter, Nelda Hesketh Greene; step-daughter Linda Samples Miles (Andy); sister-in-law, Gayle Blackwood; grandchildren, Murray Greene (Amy), Robert Greene (Amy); step-grandchildren Susan Flynt (David), Alan Hunter (Karen), Scott Hunter (Julie), Shanda Agricola (Kevin), Chris Samples, Sheanan Samples (Andrea) and Carl Samples (Malaika); an aunt, Hazel Brown; 18 great grandchildren; a niece and numerous nephews. Kathryn is predeceased by her husband, James B. Samples; her sister, Mary Elsie Powell, her brother, Robert A. Blackwood, and her parents, Arena and Robert Blackwood. Due to COVID-19, private graveside services will be held. In lieu of flowers please honor Kathryn by being kind to someone who does not look like you, think like you or believe as you do.

Kathryn Hesketh Samples (née Blackwood) of Roswell, GA, passed away on October 6, 2020, at 94. Born in Morgantown, MS, Kathryn lived throughout the southern United States and as far west as Texas. She ultimately moved to the Alpharetta/Roswell... View Obituary & Service Information

The family of Mrs. Kathryn B. Samples created this Life Tributes page to make it easy to share your memories.

Send flowers to the Samples family.