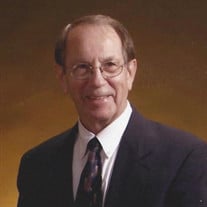 Keith Allen Banke, 84, returned to his heavenly home on March 27, 2021 with his family by his side in Cumming, Georgia. Keith was a loving and dedicated husband, father, grandfather, friend, brother and servant of Christ. Keith was born to the late Robert Banke and Dorothy Flora (Delano), in Dayton, OH on April 12, 1936. Keith was a life-long learner with a commitment to achievement. He graduated from Kiser High School in Dayton, Ohio where he excelled as a leader and student athlete. He graduated from the University of Cincinnati in 1959 with a degree in Metallurgical Engineering and received his Professional Engineering license. He was an active member of Sigma Phi Epsilon fraternity at UC. He received a degree in Meteorology from the University of Chicago while serving his country in the U.S. Air Force. He then earned an MBA from Michigan State University. He began his career as an engineer with United Technologies in CT in 1963. He then worked for 18 years in manufacturing and corporate real estate at Air Products & Chemicals in Allentown, PA. Later, he worked over 10 years for BFGoodrich in Akron, OH as Director of Corporate Real Estate. After retirement he started Banke Consulting which operated for 6 years. For many years, Keith was a member of the International Development Research Council (IDRC). Most recently, Keith supported the development of North Georgia as a member of the Forsyth County Planning Commission. He married the love of his life, Barbara, on April 23, 1960, and they enjoyed over 61 unforgettable years together. They adored their four children and fourteen grandchildren. During this time, Keith and Barbara were active members of Trinity United Methodist Church in Windsor, CT, St. Matthews E.C. Church in Emmaus, PA, Bath Church in Bath, OH and Alpharetta First United Methodist Church in Alpharetta, GA. Spending time with family and friends was his priority in life. He was a talented person with an ever-present sense of humor. Keith loved music and was passionate about playing the piano. He found joy in many other activities including traveling, sketching, cars, reading and sports. Keith is survived by his wife, Barbara; his brother, Neil (and wife Ellen) Banke of Centerville, OH; his daughter LeAnn (and husband Dave) Ritter; his sons Brian (and wife Christy), Deron (and wife Elke), and Kevin (and wife Nermine) Banke; and fourteen grandchildren. A memorial service is planned for April 24th, 2021 at Alpharetta First United Methodist Church in Alpharetta, Georgia. In lieu of flowers, the family gratefully requests donations be made to The Place of Forsyth County, Inc. at www.theplaceofforsyth.org or to Christian Dickson with TMS Global at www.tms-global.org. Reception immediately following the service at: Kimball Farms Clubhouse 1255 Seale Drive Alpharetta, Georgia 30022 Link to watch service online https://vimeo.com/537283749

The family of Mr. Keith Banke created this Life Tributes page to make it easy to share your memories.

Keith Allen Banke, 84, returned to his heavenly home on March...