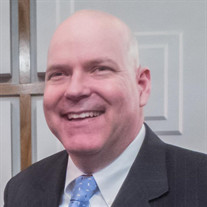 Kevin Douglas Engel was born on Saturday, June 1, 1963, to his loving parents, Wm R. Engel and the late Esther Cress Engel in Shelbyville, Illinois. At the age of five, his family moved to Industry, Illinois where Kevin remained until graduation from Industry High School. Upon graduation, he enrolled in Western Illinois University and began working part-time for Iowa-based Hy-Vee Supermarkets. In 1983, Kevin left Western Illinois University to attend the University of Iowa in Iowa City, IA where he continued working for Hy-Vee until 1986 when he graduated from UI with a Bachelor of Science Degree in General Science. After graduation Kevin worked one and one-half years for Econo Foods Grocery until April 19, 1988, when he enlisted into the U.S. Army. During his four years of military service he served in Iraq and Germany. He received several medals and accommodations including medals for good conduct and his foreign service. His final assignment was at Fort Sill, Oklahoma as Field Artillery Surveyor. Upon completion of his military service, Kevin began working with ASI RCC Inc. as a surveyor assistant on the Medicine Creek Oklahoma and Canyon Texas Buffalo Lake dam construction projects; and as the surveyor on the Colorado water treatment facility construction project using a depleted lithium mine. In 1993, Kevin relocated to Norman, OK to pursue a Master of Business Administration degree at the University of Oklahoma. While pursuing his MBA he worked at the Oklahoma University Credit Union and upon graduation was named assistant and later branch manager for First Community Bank of Virginia in Manassas, Virginia. In 1997, Kevin relocated to Tennessee where he built computers for Dell Computers until joining MetLife in April 2000 as a member of the Defined Contribution Group which administered 401(K) plans for its Fortune 500 clients. Kevin’s 21-year tenure with MetLife brought him to Alpharetta, Georgia where he participated in several key assignments including, as a key member of the Travelers Insurance Acquisition Team which successfully integrated Travelers Insurance pension business into MetLife’s portfolio. As a fair, patient, detailed and extremely thoughtful leader, Kevin not only developed processes and procedures that contributed to the success of MetLife’s pension business; he worked tirelessly to train and develop others without thought of his own career advancement. Kevin’s last position with MetLife was Senior Implementation Manager. Kevin was an avid reader, loved solving puzzles and brain teasers; woodworking, computers and repairing anything broken. Kevin showed his love through acts of service. He found a spiritual home at Saint James United Methodist Church where he showed his love for the Lord by serving in several ministries including Board of Trustees, United Methodist Men, Men’s Choir and as a Boy Scouts leader. Through his spiritual service he met the love of his life, fellow Board of Trustee member, Roslyn Dickens. Roslyn and Kevin were joined in holy matrimony on May 7, 2011. On November 30, 2021, Kevin transitioned to be with Our Lord. Kevin is survived by his wife Roslyn Dickens-Engel; father, Wm "Bill" Engel; stepmother, Karen Smith Engel; brother, Mike Engel (Wynn); stepsister, Lisa Patch (Trent); stepbrothers, John Swearingen (Tami), Troy Smith (Debbie) and Bret Smith (Erin); mother-in-law, Carolyn Saffold; brothers-in-law, Dexter Dickens and Stacy Saffold (Jeannie) and a host of family and friends. Kevin was preceded in death by his mother, Esther Cress Engel; brother, Jeffrey Noel Engel, stepmother, Mildred Cross Swearingen Engel; grandparents Hedwig Pfeiffer and Gustav Cress; and Flora Rincker and Orville W. Engel; and stepbrother David Van Swearingen.

Kevin Douglas Engel was born on Saturday, June 1, 1963, to his loving parents, Wm R. Engel and the late Esther Cress Engel in Shelbyville, Illinois. At the age of five, his family moved to Industry, Illinois where Kevin remained until graduation... View Obituary & Service Information

The family of Mr. Kevin D. Engel created this Life Tributes page to make it easy to share your memories.

Send flowers to the Engel family.