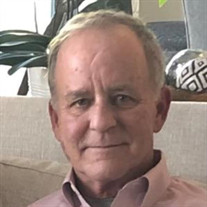 Lindsey Lamar Mouchet, III passed away unexpectedly Monday September 6 in his beloved Cherokee County, where he was a resident for more than 40 years. Lamar was a native Atlantan born at the historic Crawford Long Hospital June 24, 1954 and the son of the late Lindsey Lamar Mouchet Jr and Cecile Thompson Mouchet. Lamar attended Riverside Military Academy, was a graduate of Pace Academy, and attended Lagrange College. Lamar was known by all as a master craftsman of high end wood work. During his career, he worked with unique woods to design and build cherished pieces such as spiral staircases that reside in many Atlanta homes today as well as in the interior on a yacht. Lamar’s work was featured in many publications including Southern Homes magazine and in a television documentary about the yacht. Throughout his life, Lamar demonstrated expertise and skills across many things beyond wood working. He was known for being a dog whisperer and had the best behaved dogs alongside him, even in his last days with his pup Maggie. He loved the outdoors, camping, and skeet shooting. He enjoyed riding his motorcycles through the mountains, rebuilding old muscle cars in his shop, and driving his tractors across his pastures. Lamar moved through life with all types of music and was most knowledgeable of the 60’s, his favorite genre. Lamar enjoyed being a Dad, playing with his daughters as they grew up, and watching them grow into amazing professional women. He always boasted with pride about his daughters and where they were in their lives as adults. He was loved by all and will be missed. Rest in peace. Lamar is survived by his daughters: Lindsey Mouchet (fiancé Benjamin Cantrell) and Danielle Donehew; Walker Donehew (grandson); Ms. Marie Mouchet (Mother of his children); Marcus & Louisa Mouchet (brother), Jimmy & Melissa Hinson (sister), Deborah Mouchet (sister); Culby and Mary Beth Hinson (Nephew), Granger & Celia Harpe (Niece); and many special friends. A memorial service followed by a reception to celebrate Lamar’s life will be held Friday, September 10, NOON, at Birmingham United Methodist Church, 15770 Birmingham Hwy, Milton Ga. 30004. The service will be outside in the Cloister area and as Lamar would have preferred, no coats and ties. Masks optional. In lieu of flowers, the family requests donations to the Pat Summitt Foundation (fighting Alzheimer’s disease).

Lindsey Lamar Mouchet, III passed away unexpectedly Monday September 6 in his beloved Cherokee County, where he was a resident for more than 40 years. Lamar was a native Atlantan born at the historic Crawford Long Hospital June 24, 1954 and... View Obituary & Service Information

The family of Mr. Lamar Mouchet III created this Life Tributes page to make it easy to share your memories.

Send flowers to the Mouchet family.