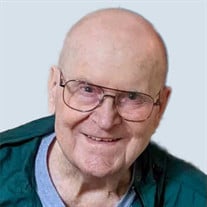 Lloyd Oliver Minear, age 94, of Marietta, Georgia, died in his sleep during the early morning hours of September 21st. Lloyd was born October 31, 1926 to Lloyd Vesper and Anna Pennock Laird Minear of Jupiter, Florida. He grew up working on the family dairy farm and delivering milk before school. After High School he joined the Army before becoming a Gator and graduating from the University of Florida. He married Joan White Minear January 2, 1959 and raised their 3 sons in Jupiter while working for Pratt & Whitney until he retired. In 1996 Lloyd and Joan moved to Marietta, Georgia where 2 of their sons, their wives, and three grandchildren then resided. In his younger days, Lloyd water skied, played tennis, was a pretty good dancer, and always carved the meat for he and Joan’s dinner parties. Lloyd often said he was not much of a conversationalist, but loved listening to all the good conversation around him. As he grew older, he grew even quieter, but his presence was always felt. His family knew they could count on him, his faithfulness, his wisdom, and his sarcastic humor. He was dearly loved and will be greatly missed. Lloyd was preceded in death by his wife Joan, his brother Laird with his wife Christine, his brother Judson, his sister-in-law Madeline Minear, and great granddaughter Abbie Fredericks. He is survived by his brother Chuck, his sister-in-law, Charlene, his sons Nathan, Frank & James, their wives Paige, Tammy, and Carrie, his 8 grandchildren (and spouses) – Scott (Lydia), Shelbie (Tim Fredericks), Harris, Colby, Penn, Maggie, Anna Beth, and Laurel, and his 3 great grandchildren – Tony & Susanna Fredericks, and Rory Minear, and many nieces, nephews, great nieces, great nephews, and cousins. In Florida, Lloyd was an active member of First Baptist Church of Tequesta, then after moving to Georgia, Piedmont Baptist Church, until after Joan’s passing when he began attending with his family at Crosspointe Community Church of Roswell, Georgia. He loved and worshiped his Lord and Savior, Jesus Christ and is now healthy, whole, and home in heaven.

Lloyd Oliver Minear, age 94, of Marietta, Georgia, died in his sleep during the early morning hours of September 21st. Lloyd was born October 31, 1926 to Lloyd Vesper and Anna Pennock Laird Minear of Jupiter, Florida. He grew up working on... View Obituary & Service Information

The family of Mr. Lloyd Oliver Minear created this Life Tributes page to make it easy to share your memories.

Lloyd Oliver Minear, age 94, of Marietta, Georgia, died in his...

Send flowers to the Minear family.