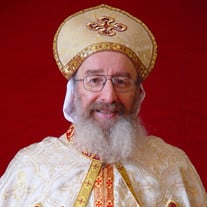 Because he has set his love upon Me, therefore I will deliver him; I will set him on high, because he has known My name. Psalm 91:14 Well done, good and faithful servant; you have been faithful over a few things, I will make you ruler over many things. Enter into the joy of your lord. Matthew 25:21 Fr. Luka Wassif, age 70, rested in the Lord on October 30th, 2021 in Roswell, GA, where he had lived for 29 years. Fr. Luka, as he was known to his congregation, was born Medhat Edward Awadallah Wassif in Toukh Dalaka, Monufia, Egypt, on December 7, 1950. After graduating from medical school and working as a General Practitioner, Fr. Luka was ordained as a priest on November 27th, 1981 by His Grace Bishop Youaness of blessed memory, serving at St. Paul Cathedral in Tanta, Egypt. In 1993, Fr. Luka was asked to immigrate to the United States with his family to serve the congregation at St. Mary Coptic Orthodox Church in Roswell, GA, where he was later elevated to the rank of Hegumen by H.G. Bishop Youssef on December 10, 2000 and where he served faithfully for the rest of his earthly life. Throughout his ministry at St. Mary, Fr. Luka oversaw the expansion of the church and the growth of the congregation into an active, close-knit spiritual community. He traveled frequently to nearby cities such as Augusta, GA and Chattanooga, TN to serve congregations there, as well as teaching at the Theological Seminary and forging relationships with other Oriental Orthodox churches in the Atlanta area. Fr. Luka was predeceased in April 2018 by his wife Nadia Girgis Wassif, whom he married in November 1981. He is survived by their three children, Phebe Wassif Iskander, Mariam Wassif, and Paul Wassif; his son-in-law Samy Iskander; his grandchildren Jacob, Julietta, and Luka; his relatives in Egypt and abroad; and the many members of his congregation whom he also considered his beloved children and who supported him throughout his illness. Services for Fr. Luka will begin Wednesday, November 3, 2021 with Vespers at 7:00 pm followed by midnight praises at St. Mary Coptic Church, 11450 Houze Road, Roswell, GA, 30076. On Thursday November 4, also at St. Mary, Divine Liturgy will be held from 8:00-10:30 am, to be followed by the funeral. Fr. Luka will then be interred alongside his wife at Green Lawn Cemetery, 950 Mansell Rd.

Because he has set his love upon Me, therefore I will deliver him; I will set him on high, because he has known My name. Psalm 91:14 Well done, good and faithful servant; you have been faithful over a few things, I will make you ruler over... View Obituary & Service Information

The family of Fr. Luka Wassif created this Life Tributes page to make it easy to share your memories.

Because he has set his love upon Me, therefore I will deliver...

Send flowers to the Wassif family.