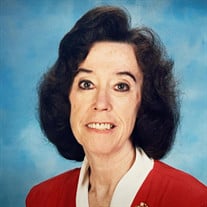 God Called, She Answered Mary Rosalind “Roz” Venti was born Mary Rosalind Kenney in Providence, Rhode Island on February 24th, 1935. Roz was the eldest of 2 children and was predeceased by her brother John Kenney. Roz is survived by; her husband George W. Venti, Jr.; 4 sons, Michael, Thomas, Vincent & Mark; as well as 4 grandchildren, Cameron, Tyler, Erin & Brandon. Roz dedicated her life to serving others. She graduated with a Psychology degree from the College of New Rochelle in 1956 and became certified to teach Kindergarten through fourth grade. Not only did Roz mentor & help young people discover a passion for learning through school, but she also embodied this in her personal life. In January of 1973 Roz’s college roommate and best friend Susy Spencer mentioned of a recently widowed gentleman named George W. Venti, Jr. who was serving in the Army & stationed in Germany with her husband David. George had 3 young boys: Michael (9) Thomas (7) & Vincent (5). After being pen pals for several months, Roz & George decided to wed on September 22nd, 1973. Not only did Roz take George’s 3 boys into her heart, she also still had a desire to bear a child of her own. On September 1st, 1974 Roz gave birth to Mark, a baby boy with red hair resembling her fathers. Roz’s teaching career began in Uxbridge, MA (1956) and concluded in Decatur, GA (1995) with stops in Kaiserslautern, Germany - Long Island, NY – Columbus, GA along the way. Roz was an amazing Wife, Mother & teacher. She was selfless, always made time for others & acted with a servant’s heart. Roz had the unique ability to leave others with a feeling of being better off just because they knew her. “How lucky am I to have something that makes saying goodbye so hard.” - Winnie the Pooh

The family of Mrs. M. Rosalind Venti created this Life Tributes page to make it easy to share your memories.

Send flowers to the Venti family.