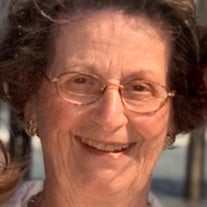 Margaret Richardson Mehlinger August 29,1923 – August 12, 2021 Margaret was 97 years old when she died and is preceded in death by her husband of 69 years, Delphas Eugene Mehlinger. She was preceded in death by siblings Harry Dean Richardson, William Orville Richardson, Harry Dale Richardson and Nadine Richardson Parker. Survivors include daughters Mary Mehlinger Power and Susan Mehlinger Riordan, son William Eugene Mehlinger and wife Karen Vitkus Mehlinger, and son Richard Fred Mehlinger and wife Judith Leah Mehlinger. She is survived as well by 13 grandchildren and 29 great grandchildren. Born on August 29, 1923 in a one room farm house near Hoxie, Kansas, Margaret was one of five surviving children of Harry Orville and Gertrude Gill Richardson. At a time when it was rare for women to attend college, Margaret did just that, graduating from Kansas State University in 1947, persevering after interruptions caused by the advent of World War II and a period of time spent in Hoxie to help her family care for her ailing younger sister. Education would always play a major role in Margaret’s life. In the 1960s, she attended the University of South Florida to earn her Florida teaching certificate. She went on to pursue her love of education by teaching elementary school in Florida and science at Berkmar High School in Gwinnett County, Georgia where she was named Teacher of the Year. Margaret loved God, family, country, bridge, music, sewing, creative arts, baking, cooking, reading, education and, most especially, giving back to those less fortunate. Those who knew Margaret knew that she was a lifelong learner, a stack of books from the local library always in sight beside her favorite chair. She was also an accomplished pianist, often entertaining appreciative family and friends. Her family will always remember her for her love, wit and determination. The grandchildren and great-grandchildren will remember how Nama spoiled them on their visits with her cookies, buttery toast, cinnamon rolls, and her famous scrabble. The farm and her family home in Kansas always held a prominent place in Margaret’s heart and thoughts, among many fond memories of the places where Margaret and Delphas raised their four children. Kansas homes included Marion and Hoxie. As the children were growing up, the family was carried to Topeka, Kansas; Saint Peter, Minnesota; Brooksville and Balm, Florida; and Atlanta, Georgia. As Bill, Richard, Sue and Mary moved on with their own adult lives, the loving couple retired in Louisburg, North Carolina to an active life which encompassed special friendships, abundant golf and their commitment to Care and Share, a church-based community service to the poor which grew into an expansive lifeline for the needy of the area. From there, they moved to Alpharetta, Georgia to be amongst family, enjoying their home in the North Farm community. After the passing of her husband, Margaret moved to Brookdale/Chambrel, a senior complex, where she continued to excel in bridge, dominoes and, as always, reading. She remained a dedicated mother, grandmother, and great-grandmother until her passing. Margaret leaves behind a treasure of beautiful memories, and will be deeply and forever missed by her friends and family. A memorial service will be held Tuesday, September 7th at 2:00 PM, Northbrook United Methodist Church, 11225 Crabapple Road, Roswell, Georgia 30075 – Reception Immediately Following. Internment will be in Hoxie, Kansas on September 11th at 11:00 AM.

The family of Mrs. Margaret Mehlinger created this Life Tributes page to make it easy to share your memories.

Send flowers to the Mehlinger family.