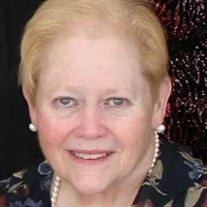 Marguerite (Marge) Walsh, 78, of Roswell, Georgia, died peacefully on February 24, 2021, after an extended illness. She will be lovingly remembered by her husband, William Walsh; her children, Dawn and Matthew O’Shea, Erin and Christopher Malafronte, and William Walsh; her grandchildren, Lily O’Shea and Daniel Malafronte; her brother, Robert and Judith Raichle; and her sister-in-law, Carolyn Raichle. She was preceded in death by her parents, Kurt and Marguerite Raichle, and her brother, Richard Raichle. Marge was born in Philadelphia, Pennsylvania in 1942. She graduated from Fitzgerald Mercy School of Nursing in Philadelphia in 1963. After graduation, she moved to the Westerly, Rhode Island area where she worked as a registered nurse at the Westerly Hospital and, later, the Westerly Nursing Home. In 1968, she married Bill, her lifelong love and partner. They were happily married for 52 years and raised their three children in Pawcatuck, Connecticut. Marge enjoyed her retirement years in Florida and Georgia. Throughout her life, Marge was a loving daughter, sister, wife, mother, friend, and grandmother. She will be remembered for her beautiful smile, her passion for gardening and baking, and her enduring faith. She will be dearly missed by all who knew her. A private funeral mass will be held for the immediate family.

Marguerite (Marge) Walsh, 78, of Roswell, Georgia, died peacefully on February 24, 2021, after an extended illness. She will be lovingly remembered by her husband, William Walsh; her children, Dawn and Matthew O&#8217;Shea, Erin and Christopher... View Obituary & Service Information

The family of Mrs. Marguerite Walsh created this Life Tributes page to make it easy to share your memories.

Send flowers to the Walsh family.