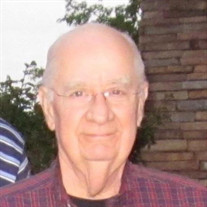 Marty H. McCommon, age 88, of Marietta, Georgia, passed away Thursday, December 23, 2021. Marty invested more than 60 years in a career that helped people and organizations be more successful. After his discharge from the U.S. Air Force in 1952, he went to work as a ramp service agent for Delta Air Lines and retired 41 years later as the director of leadership development for the airline. After his retirement from Delta Air Lines, he immediately began working with Southern Polytechnic State University, developing and teaching leadership programs. In 1995 he began serving as the executive director of the Atlanta Quality Resource Center at the Metro Atlanta Chamber of Commerce. He served in several roles with the Metro Atlanta Chamber of Commerce until his retirement in 2014. He also served as executive director of the Southern Center for Organizational Excellence at Georgia State University. He was a committed Christian, serving in numerous positions as a layperson in the church, including chair of deacons three times, Sunday School teacher, and messenger to the Southern Baptist Convention’s annual meeting several years. Marty was a devoted family man who enjoyed spending time with his children and grandchildren. He and his wife loved traveling the world. Among their many trips, the couple walked the Great Wall of China, climbed the ruins of Machu Picchu in Peru, took a hot-air balloon ride over the Serengeti National Park in Africa, and visited palaces and churches along the Volga River in Russia. He was preceded in death by his wife of 57 years, Sarah Alexander McCommon. He is survived by his son Mark (Pilar) McCommon; daughter, Margaret McCommon Dempsey Colson (Keith Colson); four grandchildren, Anna Dempsey McIldoon, William Dempsey, Michelle McCommon, and Andrew McCommon; and three great grandchildren, Clayton McIldoon, Caroline McIldoon, and Elizabeth McIldoon. A private service of remembrance for family will be held at First Baptist Church, Roswell, Georgia. Interment will follow at Green Lawn Cemetery in Roswell, Georgia. To view the livestreaming of the service on Monday, Jan. 3, at 11 a.m., go to fbroswell.org and click on the quick link for “live broadcast.”

Marty H. McCommon, age 88, of Marietta, Georgia, passed away Thursday, December 23, 2021. Marty invested more than 60 years in a career that helped people and organizations be more successful. After his discharge from the U.S. Air Force in... View Obituary & Service Information

The family of Mr. Marty H. McCommon created this Life Tributes page to make it easy to share your memories.

Send flowers to the McCommon family.