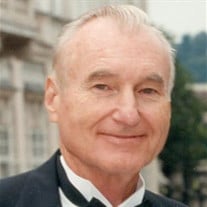 Walker, Maxwell Warren (Max) Alpharetta – Maxwell (Max) Warren Walker, 89, Beloved husband of Kathleen (Kay) McCreary Walker for 64 years, passed away peacefully on Tuesday, January 8, 2019 with his loving family at his side. He was the epitome of a servant-leader, with an extraordinary dedication to his family and his profession. Mr. Walker was born in Forest Park, the son of the late Charles Clinton and Mamie Yancey Walker. He was educated at Forest Park High, and graduated from The Georgia Institute of Technology with a degree in architecture in 1950. During his time with Delta, he helped design and develop airports in Houston, Memphis, Detroit, Cincinnati, Miami, and Orlando before joining the City of Atlanta. Max Walker was a nationally recognized pioneer of professional airport planning. His vision for a world class airport came to life in Atlanta; the team he lead as Director of Planning and Development for the Department of Aviation from 1967 to 1984 transformed a purely domestic Hub airport into a world-renowned international gateway and one of the world’s busiest airports. Features air travelers take for granted – a series of terminals connected by a mile-long people mover, parallel runways, close-in parking – came from the intensely collaborative process that Walker cultivated between the city, the airlines, and the architectural-engineering community. Sixty design proposal briefs were reviewed, ten were chosen for further analysis, and the final plan was built on time and under budget in 1980. “More than any other individual, he has made the new terminal a reality. He is an unsung hero.” said his boss, Richard A Stogner. Walker continued to serve the airport as Deputy Commissioner, and retired in 1993 as Atlanta’s Commissioner of Aviation. In addition to his wife, Mr. Walker is survived by his loving children Deborah Stanziano of Alpharetta, Pat Walker (Jeanne Dufort) of Madison, and Phillip Walker of Sandy Springs. Max was a great dad - weekends were reserved for family, playing baseball together, hours on the tennis court, and summer vacations to Hilton Head. He was very proud that all three of his children are also graduates of Georgia Tech, and share his passion for Georgia Tech Athletics. He is also survived by three grandchildren, Katie and Joseph Stanziano of Alpharetta, Johanna Dufort Hunt of Paris, KY, a great-grandchild, Henri Brown Hunt of Paris, KY, and nieces and nephews. He is predeceased by brothers Charles Walker Jr. and Edward Walker. Throughout his life, Mr. Walker has been a faithful church leader, teaching Sunday school and, after retirement, using his architectural training and project management skills to lead a project that expanded the campus of the Northbrook Methodist Church. Funeral services will be held on Saturday, January 12, 2019 at 2:00pm at Northbrook Methodist Church at 11225 Crabapple Rd, Roswell, followed by a reception to which family and friends are invited. Interment will be in Madison at a later date. Memorial contributions in memory of Mr. Walker may be made to the building fund of Northbrook Methodist Church.

Walker, Maxwell Warren (Max) Alpharetta &#8211; Maxwell (Max) Warren Walker, 89, Beloved husband of Kathleen (Kay) McCreary Walker for 64 years, passed away peacefully on Tuesday, January 8, 2019 with his loving family at his side. He was the... View Obituary & Service Information

The family of Mr. Maxwell "Max" Warren Walker created this Life Tributes page to make it easy to share your memories.

Send flowers to the Walker family.