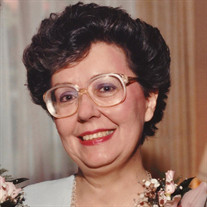 Nancy Brown Lewis McNeely, 86, of Alpharetta, Georgia, passed away very peacefully on June 4, 2020, from complications of old age. Nancy was born January 16, 1934 in St. Louis, Missouri, the only child of Alexander Graves and Martha Lillian (Gerhart) Lewis. She was a 1952 graduate of Kirkwood High School and studied art at Washington University in St. Louis. Nancy was a 6th generation St. Louisan and took great pride in that heritage and in the history of her hometown. Her 4x-great grandfather, Auguste Antoine Flandrain, was a French soldier who settled in St. Louis after coming to America with the Marquis de Lafayette to fight for American independence. In 1962, she married her love, Joe Harris McNeely, who preceded her in death in 2005. Soon after their marriage they moved to Dallas, Texas, where they made their home for 40 years. Nancy was a homemaker, a loving wife and a devoted mother. She was also a talented artist who worked in watercolor, pencil, fabric, and stained glass. She was a Mary Kay Cosmetics representative for many years, sang in her church choir, volunteered in many different capacities and was a devoted employee at Foley’s, formerly known as Sanger-Harris department stores. She was a long time member of Northpark Presbyterian Church and the St. Andrews Sunday School Class in Dallas. After becoming a grandmother, Nancy was called “Grancy” by all who knew and loved her. She took great joy in her family and in their many accomplishments. Nancy is survived by her daughter, Marcia McNeely Grimsley (John) of Alpharetta, grandson Jack Grimsley, granddaughter Neely Claire Grimsley, sister-in-law Jane Bruns of Rockville, Maryland, and several loving nieces, nephews, and cousins. She was preceded in death by her parents, her husband, and her son, James Alexander “Jim” McNeely. Jim died tragically in 1986 at the age of 18, and through this loss Nancy came to a deeper relationship with her Savior which she carried with her for the rest of her life. She lived Christ’s greatest commandments, to love the Lord, and to love her neighbor, and this is the legacy she leaves behind. A private graveside service will be held in Dallas, TX where she will be interred next to her beloved husband and son. In lieu of flowers, the family suggests donations be made to Mount Pisgah United Methodist Church of Alpharetta, GA, earmarked for Children/Student Life retreat scholarships. Donations can be sent to Mount Pisgah UMC, 2850 Old Alabama Rd, Johns Creek, GA 30022, or online www.mountpisgah.org/give and should be noted “in memory of Nancy McNeely”.

The family of Mrs. Nancy Lewis McNeely created this Life Tributes page to make it easy to share your memories.

Send flowers to the McNeely family.