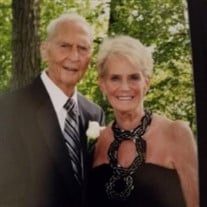 Naomi Saye Wolfe of Alpharetta, Georgia passed away on October 13, 2021 at the age of 89. Naomi was born in Athens, Georgia but lived most of her life in California, New England and eventually settling back in Alpharetta in 1981. Naomi is survived by her beloved husband, of 71 years, Martin W. Wolfe; their three children: Rhonda Wolfe Nachamkin (Jeffrey), L. David Wolfe (Patterson) and Mark R. Wolfe (Rosalie); seven grandchildren: Eli W. Nachamkin (Kim) Saree Nachamkin Naggiar; Jeremy L. Wolfe, Reid M. Wolfe (Jaime), Clarke P. Wolfe, Garity M. Wolfe and Barrett H. Wolfe; and nine great-grandchildren. Naomi owned her own business with her late sister-in-law, Helma Wolfe Tauber, however, her true passions were her family and her artwork. She was an accomplished artist, graduating from Silvermine School of Art in Stamford and studying under the tutelage of Rayma Spalding - Painting Stamford, Connecticut and Ivan Biro – Sculpture New York, New York. Naomi was a founding member of the Stamford Art Association, her work was recognized in many juried Art Shows in Connecticut and Georgia while her paintings hung in the Governor of Connecticut’s Office. Naomi was inducted as a member of the National League of American Pen Women, Inc., (Atlanta Pen Women) a sisterhood of talented women who are dedicated to their craft and to sharing their passion for the arts. Her other passion was her husband Marty from whom she was inseparable, be it traveling the world or grocery shopping. Naomi truly believed, as did those who knew her, that her marriage was a match made in heaven. Naomi doted on her children, grandchildren and great-grandchildren, never missing a religious ceremony, school play, graduation, grandparents’ day or sporting event. Naomi Wolfe, you will always be with us…A thing of beauty is a joy forever. A memorial service will be held on Sunday, October 17, 2021 at 2PM at Northside Chapel Funeral Directors, 12050 Crabapple Road, Roswell, GA. 30075 The family will be hosting a reception following the service at the home of Jeff and Rhonda Nachamkin 10004 Branchwind Close, Roswell, GA. 30076 Masks Required Shiva Times: Sunday 10/17 5:00-8:00PM Monday 10/18 6:00-9:00PM In lieu of flowers we ask that donations be made to: Dementia Spotlight Foundation 1303 Citadel Drive NE Atlanta, GA. 30324

Naomi Saye Wolfe of Alpharetta, Georgia passed away on October 13, 2021 at the age of 89. Naomi was born in Athens, Georgia but lived most of her life in California, New England and eventually settling back in Alpharetta in 1981. Naomi is survived... View Obituary & Service Information

The family of Mrs. Naomi Wolfe created this Life Tributes page to make it easy to share your memories.

Naomi Saye Wolfe of Alpharetta, Georgia passed away on October...